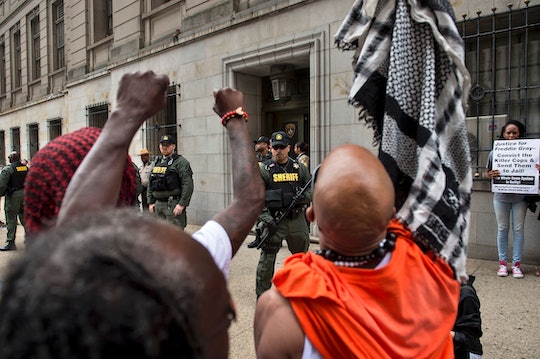 The latest in a series of controversial trial outcomes in the death of Freddie Gray was delivered in Baltimore on Thursday. Caesar Goodson, one of the Baltimore City Police officers accused in Gray’s death, was cleared of all charges by a circuit court judge, according to a Baltimore Sun report. Goodson’s was the third, and arguably the most serious case, presented by prosecutors in Gray’s death. It was also the third acquittal in the racially and politically charged incident that sparked riots in the city last year. And the case continues to spark deep frustrations over police brutality and race, as shown in this one tweet about Freddie Gray’s death. For people following on social media Thursday, Goodson’s acquittal quickly became an example in tensions between police and the public in Baltimore.

Goodson was one of six officers involved in the incident that occurred last April. He also faced the most serious slate of charges, according to the Sun. Goodson was indicted for second-degree murder, three counts of manslaughter, second-degree assault, reckless endangerment, and misconduct in office. As the driver of the van transporting Gray to the Baltimore City Detention Center, prosecutors alleged that Goodson gave Gray the “rough ride” that led to the fatal injuries that ultimately caused Gray’s death — an allegation that seemed destined to stick after the state medical examiner ruled Gray’s death a homicide last year.

But even ruling Gray’s death a homicide couldn’t guarantee a conviction — an outcome that came as a sad surprise to many, including Twitter user @Hey_AshB. In this tweet, she described the frustration felt by those who hoped the case would lead to police accountability in Gray’s death.

It was during that van ride that Gray sustained what the autopsy report called a “high-energy” injury to his neck and spine, the Sun reported last year. The state medical examiner said in the official report that Gray, who was not belted in during the ride, was thrown against a wall when the van changed direction. And because Gray’s wrists and ankles were shackled at the time, the detainee couldn’t support himself when he fell.

The medical examiner concluded that Gray’s death “could not be ruled an accident,” according to the Sun. The examiner instead ruled his death a homicide because “officers failed to follow safety procedures through acts of omission.”

Gray died one week after sustaining injuries during the van ride.

The Washington Post reported that at least 40 protesters had gathered outside the courthouse, awaiting the verdict. In the wake of the acquittal, one man told the Post that the decision was akin to a blank check for Baltimore officers:

They’re saying you can go deaf, dumb, and blind and say you didn’t know and get away with it. To say that no one knew he needed any medical attention really means they can do anything to him.

With prosecutors unable to secure convictions in the earlier cases — Officer William Porter was granted a mistrial and Officer Edward Nero was acquitted — it’s easy to understand why frustrations are deepening. What isn’t clear is whether the coming trials will prove any more compelling in court than the case against Goodson.

According to the Sun, the case against Lieutenant Brian Rice will begin on July 7, followed by Officer Garret Miller (July 27), a new trial in the case against Porter (Sept. 6), and Sgt. Alicia White (Oct. 13). The officers have pled not guilty on all counts.