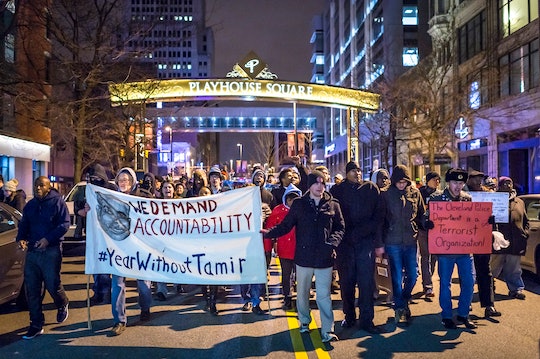 On Saturday, in the Cincinnati Zoo, a gorilla named Harambe was shot and killed after a 4-year-old boy fell into his enclosure. While Harambe wasn't necessarily harming the boy, he took an interest in him, and dragged him through the enclosure before zoo officials intervened. Officials deemed shooting Harambe the safest way to remove the boy from the enclosure, and, ever since, the Internet has exploded with anger at the boy's parents and the zoo itself. However, this one Tweet about Harambe the gorilla sums up a fact we've been ignoring: there are currently bigger issues in the United States that have received less attention. Consider: In the same state in 2014, an innocent 12-year-old boy was shot and killed, and nobody was charged for his death.

Critics have been quick to demand that charges be brought against the zoo or the boy's parents in the Cincinnati Zoo case in order to prevent a similar situation from happening again or to demand "justice" for the endangered gorilla. A Change.org petition called "Justice for Harambe" has racked up more than 350,000 supporters. A Facebook group of the same name has garnered over 123,000 likes.

Some Twitter users, however, have been quick to draw attention to the fact that Harambe has received more passionate calls for justice than 12-year-old Tamir Rice did after his senseless death in 2014, when a police officer who was in training shot him while he held a pellet gun. The officer wasn't indicted by a grand jury because of a "perfect storm of human error," according to lead prosecutor Tim McGinty said. And that explanation for shooting a 12-year-old was easier to swallow for many people than the death of Harambe. This one tweet sums it up perfectly:

All my fellow Ohio people enraged about the senseless killing of a gorilla. Boy do I have a WILD story for you about a little boy named Tamir Rice.

"But wait!" some may be quick to protest. Rice's case was in 2014. Surely people paid much more attention to Rice's case then than they are paying attention to Harambe's case now. However, if you look at the social media statistics, there's a surprising mismatch in engagement: A "Justice for Tamir Rice" Facebook group drew only 11,192 Likes, less than a tenth of Harambe's Facebook group. A Change.org petition calling for a special prosecutor to determine the involved officers' guilt received only 119,773 supporters — about 34 percent of the amount of supporters Harambe's petition received.

Both situations involved something that could be construed as dangerous or ambiguous: The police officer in the Tamir Rice case didn't know if Rice's gun was real or not; zoo officials didn't know if the boy in the enclosure was in danger or not. But the amount of attention from the public in each scenario is telling, and should serve as a reminder: the Black Lives Matter movement is far from unnecessary, especially when the killing of a gorilla engages more people than the killing of a black 12-year-old.