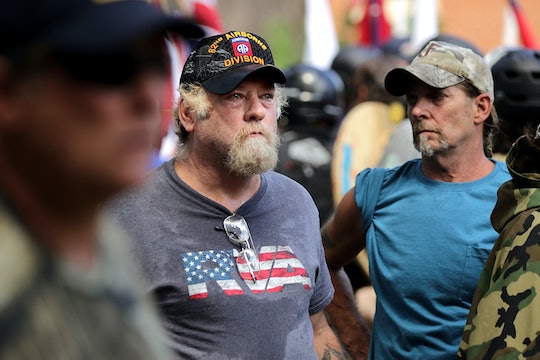 On Saturday morning, various alt-right groups and their allies descended on Charlottesville, Virginia for a "Unite the Right" rally, to protest the state taking down a statue of confederate General Robert E. Lee from the city's Emancipation Park. In anticipation of the rally, other alt-right groups flooded the University of Virginia's campus, clutching torches and shouting, "we will not be replaced!" The past 48-hours have been nothing but a terrifying display of white supremacy, and this one tweet about the alt-right rally perfectly explains just how twisted and bigoted their views really are.

Twitter user @JuliusGoat tweeted out the now viral picture of a large group of white men holding tiki torches (of all things) on the University of Virginia campus, along with the caption, "Imagine if these people ever faced actual oppression."

In a multi-tweet thread, among other salient points about the lack of oppression white people have experienced throughout all of history, they wrote:

Their churches were never burned. Their lawns never decorated with burning crosses. Their ancestors never hung from trees. ... Their mothers aren't being torn away by ICE troopers and sent away forever. They won't be forced to leave the only country they ever knew. ... There is no travel ban on them because of their religion. There is no danger for them when they carry dangerous weaponry publicly.

The Twitter user is on point. When the alt-right chants, "we will not be replaced," what in the world are they talking about? That people of color or of different religions shouldn't have a voice or representation? Pretty much.

You can check out parts of the thread below:

On Saturday, Donald Trump said in a statement while on vacation at his golf club in New Jersey:

He did not call out white supremacy or the alt-right groups by name. Trump is wrong — there is no hate, violence, or domestic terrorism coming from "many sides," unless you count the various sects of white nationalists who gathered on Friday night and Saturday morning in Virginia.

He does have a point about one thing — white supremacy has a long, long, history in America. But the alt-right protestors flanked with guns, racist signs, torches, and Make America Great Again hats have been emboldened by Trump's 2016 campaign and his stubborn refusal to disavow the white supremacists who support him, to the point of being almost petulant about not taking responsibility for his tacit approval of white nationalism. If he won't disavow white nationalism, the least Trump could do is take ownership of its most recent manifestations.

Imagine for a moment if Black Lives Matter protestors carried the same weaponry as those attending the "Unite the Right" rally, what would the police response be? Or if it was a Muslim who drove a car into peaceful counter-protestors, killing one person and injuring 19 more, as an alt-right protestor did Saturday morning, what Trump call them?

If Donald Trump won't denounce and take a stand against white supremacy, then it's time for every other white person to turn off cable news and do more than just shake their heads while tweeting, and protest against it. Or call out their white family members and friends when they give themselves away. .

People of color have led the charge for their own civil rights for far too long. The only way to make sure white supremacy doesn't last for another "long, long time" is for white people to resist it, too. Being complacent about white supremacy makes white people complicit, and ensures that what happened in Charlottesville this weekend will happen again. And again.