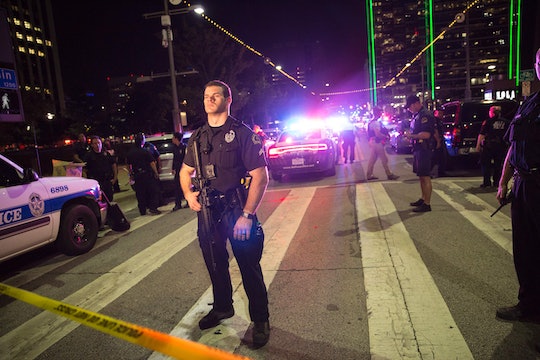 A peaceful protest in Dallas turned into a chaotic scene after snipers and shooters killed five police officers, specifically targeting white officers. The attack has now become the deadliest attack on the United States law enforcement since Sept. 11, 2001. Earlier this week, the nation was shaken and outraged with the news of the senseless murders of Alton Sterling and Philando Castile at the hands of police officers. These events have stirred up conversations and heated debates about race relations, police brutality, and gun violence in the United States. But, one tweet about the Dallas shooting makes an important point that we need to remember: these shooters do not represent the Black Lives Matter movement, just as the deadly terrorist attack at an LGBTQ nightclub in Orlando does not represent the Islamic faith.

Around the country, rallies and marches were organized on Thursday to protest against the fatal shootings of Sterling and Castile, only adding to the list of police-involved murders of black men. According to The Washington Post, police have shot and killed 509 people in 2016, 123 of the victims were black.

These statistics justifiably create outrage in communities and exemplify the frustrations and fears that are felt by so many Americans every day. While the horrific headlines this week may spark hateful conversations on race, this powerful tweet may help remind us, as a nation, to look deeper and bigger in dark days like these.

A lot is still unknown about the suspects and their identities. It is known, however, that the shootings were targeted and deliberate.

According to CNN, Dallas Chief of Police David Brown told reporters on Friday that one of the suspects "was upset about Black Lives Matter, he said he was upset about the recent police shootings." Brown continued that the shooter said he "wanted to kill white people, especially white officers."

"When we came tonight everything was so peaceful, man. It was united," Jamal Johnson, who attended Thursday’s rally in Dallas, told The Daily Beast. "And for them [the shooters] to ruin it like that."

If the Dallas assailants are grouped with the entire Black Lives Matter movement — a group that stands for equality, justice and freedom, not murder and mass shootings — it would be no different than linking the Orlando shooter to all other Muslims or the Sandy Hook shooter to all other Catholics.

While what is known about the shooters and their motives will likely add fuel to an already very heated fire, it's important to remember that an extremist's hateful mentality does not always reflect the entirety of the groups they choose to align with. Sadly, there are people in the world who love to hate, and failing to separate them from those who strive to do good in the world will only continue to divide our nation, rather than unite it to figure out how to make things better in the future.