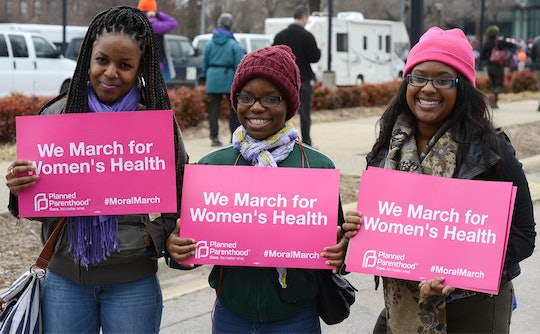 On Friday afternoon, an active gunman opened fire at a Planned Parenthood in Colorado Springs, CO, and early reports indicate at least four police officers and a total of nine people have been taken to local area hospitals. Police also confirmed that three individuals have been killed, one police officer and two civilians. While the situation unfolded, numerous conversations were carried out online and in 140 character tweets calling into question the public labeling of the attack, speculation concerning the motive behind the attack, and continued confusion about the perpetrator him or herself. (Update: After an hours-long stand-off, the shooting suspect has been detailed by police. Said Mayor John Suthers Friday, "The perpetrator is in custody. The situation has been resolved." Later Friday, authorities identified the suspected gunman as Robert Lewis Dear, 59, from North Carolina.)

Although there was initial confusion concerning the exact location of the shooting, it's been confirmed by authorities that police and the suspect exchanged gunfire inside a Planned Parenthood clinic. This confirmation brings Planned Parenthood's history of violent attacks perpetrated by anti-abortion activists back to the surface, as well as a more in-depth look at the pro-life movement itself. Planned Parenthood is no stranger to bombings, arson, shootings, and even chemical warfare, but it's still absolutely perplexing that so many of these violent attacks are carried out by individuals that claim to be in the business of saving (or at least protecting) lives.

One tweet summed up the mind-numbing hypocrisy regarding the pro-life movement perfectly, calling to question the real reason why pro-life advocates are so against a woman's right to choose, and it seems that the pro-life movement's name should be changed to "anti-choice" instead of "pro-life," as it's hard to advocate for the protection of life when you're willing to take a life. Many of the past attacks on Planned Parenthood have been proudly carried out by pro-life advocates, from Troy Newman, who was behind the creation and distribution of fallacious and doctored tapes, to John Salvi, a well-known abortion opponent who carried out the fatal shootings at two Planned Parenthood reproductive health clinics in Brookline, Massachusetts, on December 30, 1994, killing two and wounding five.

The Republican Party must continue to uphold the principle that every human being, born and unborn, young and old, healthy and disabled, has a fundamental, individual right to life.

And while it's too early to assume who or what or how today's Planned Parenthood gunman chose to identify, it is early enough to assume that this line of thinking is splintering our country (and subsequently, our world), in two. But what do you say to someone who is willing to take a life in exchange for "saving countless unborn lives"? What do you say when that rationale of thinking is actually seen as a legitimate argument? The overwhelming amount of self-righteousness an individual must have in order to give themselves permission to end a life in the so-called name of saving another life (a life they wouldn't be responsible for or support in any capacity) is, to me, unbelievable and unimaginable.

You don't save lives by taking lives. You don't save future lives by taking current lives. It's no individual's job to decide who is "right" and "wrong" in the matter of another person's reproductive health. It's not "right" to walk into a healthcare clinic and assert that taking lives in the name of saving lives is "right" and "just". It's not — and you don't have to be pro-choice or pro-life to know right from wrong. You just need to be a good person to know that. If we're going to use the "pro-life" argument as a justifiable reason for what happened in Colorado today, then we need to seriously rethink how we define the word "pro-life". Because taking a life is not indicative of being pro life. That's not how this works.