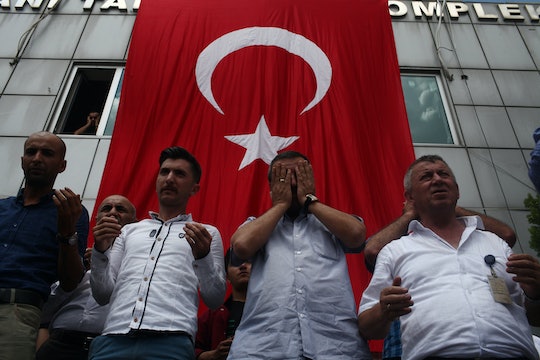 Whenever any kind of violent terrorist act occurs throughout the world, inevitably, the discussion always seems to lead to Islam. Since ISIS is often quick to take credit for these brutal attacks, and since the group so proudly proclaims that it is fighting in the name of Islam (the religion that billions of Muslims throughout the world adhere to), it becomes incredibly easy to assume that ISIS is representative of all Muslims, and that Muslims are somehow complicit in the lives lost during the suicide bombing at an airport in Brussels, for example, or at the Bataclan theater in Paris. And, after the latest terrorist attack, this time at an airport in Istanbul late Tuesday, people are still strongly equating all of Islam with terrorism. But this one tweet about Turkey is a crucial reminder of why, as The Independent also noted, claiming that ISIS represents Muslims is completely inaccurate. Though ISIS claims to want to protect Islam and Muslims, the terrorist group actually kills more Muslims than any other group.

Author and activist Iyad El-Baghdadi took to Twitter Tuesday to express his anger and frustration over both the terrorist attack on Istanbul, as well as the discussions that followed about ISIS and Islam, writing a series of tweets challenging the idea that radical Islamists are Muslims. He wrote:

While most people likely wouldn't think of Muslims as being ISIS' biggest victim — after all, ISIS claims to be fighting for Islam — the numbers tell a much different story. After the Paris attacks in 2015, The Telegraph noted that "the Islamic State has killed far more Muslims than Christians, Westerners, or minorities," and that the United Nations has singled out ISIS as being behind a significant number of Muslim civilian deaths in Iraq, Syria and Lebanon. Similarly, according to BBC News,

What's more is that, while terror attacks in the West are often the ones that get the most attention and the most outpouring of support, they are comparatively rare to the number of attacks that occur regularly in predominantly-Muslim countries. According to BBC News,

Of course, that is not to say that the attacks that targeted non-Muslims weren't horribly tragic or worthy of worldwide condemnation, but it does point out that Muslims in the Middle East are also living under the threat of ISIS terror attacks — and that they are more likely to be victims of it.

In an article for CNN, writer and radio show host Dean Obeidallah discussed the thousands of innocent Muslims who had been killed between July and September 2014 alone, and argued that, while ISIS likes to claim that they are fighting for Islam, really they are just fighting for, well, ISIS:

Al Qaeda and ISIS are...not about the concept of 'submit to Islam or die,' as some have claimed. It's submit to ISIS/al Qaeda or die. Both organizations clearly don't care how many Muslims they kill. Yet at the same time they will both claim they are carrying out their actions in the name of Islam.

In an essay on Medium, Shaykh Daniel al-Jaʿfarī argued that the widespread willingness to point to Islam as the problem behind ISIS actually gives the terrorist group a leg up, allowing them to continue killing Muslims in the Middle East while also fueling the West's fear of all Muslims as a whole:

As a result, many in the West are left to believe that they are the prime target of groups like ISIS, when that could not be further from the truth. Muslims are their main target and their main victims, and the Shi`ah, in particular, are those with the greatest interest in wiping out the terrorism that has endlessly victimized them in various forms for well over a thousand years.

There's no doubt that terrorism is a massive global issue, and one that can't and shouldn't be ignored. But focusing on so-called solutions like blocking borders to all Muslims, or reacting to terrorist attacks by shouting slurs at brown-skinned people you see on the street (who may or may not even be Muslim in the first place) isn't going to stop ISIS anytime soon. The idea that ISIS is fighting for Muslims is a scary thing to hear when you are a non-Muslim who now has to be afraid of going to the airport or to a nightclub. But, like pretty much all the claims that ISIS likes to spew, it's backwards, misinformed, and just plain dangerous.