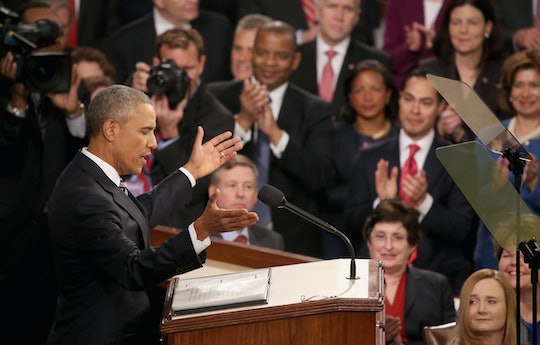 In his final State of the Union address, President Barack Obama made strong points about addressing global warming, making higher education affordable and combating terrorism and eradicating poverty. Those are all platforms people can get behind. But it was the one big issue President Obama's State of the Union address didn't include that is problematic: What about women's rights?

We give Obama credit for advocating for equal pay and paid leave, saying they are "the right thing to do" and vowing he will not stop the fight until they are achieved. That's good — those points are necessary and totally worthy of mention in Obama's last SOTU. But those few seconds in the hour-long speech were all that were devoted to addressing the problems American women face on a daily basis.

We know Obama is all for protecting women's access to healthcare, saying in the past he wants to "fight back against anyone who tries to roll back the right for a women to make her own health care decisions." But, even though that issue remains as hotly debated and threatened as ever, mention of it was glaringly absent from tonight's State of the Union. With Republican presidential candidate and Texas Sen. Ted Cruz vowing to defund Planned Parenthood, Speaker of the House Paul Ryan opposing abortions even in medical emergencies, and Donald Trump being Donald Trump, it's clear we need an advocate for women now more than ever. Sadly, Obama let women down.

The issue with Obama's omission was highlighted in one perfect, succinct tweet from writer Chloe Angyal:

Angyal then drove her point home.

Preach. It's disappointing that Obama left women's rights mostly out of his last State of the Union — but there's a simple way he can make up for it: With actual action.