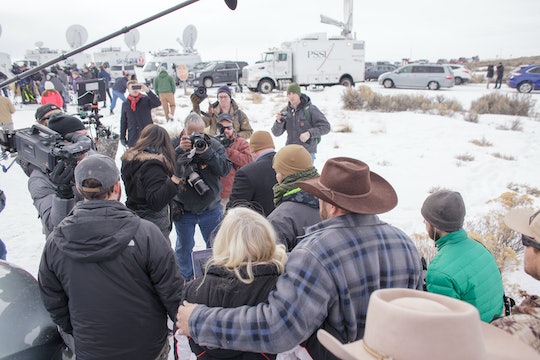 A small protest in Burns, Oregon, is making national news. CNN reported that anti-government protestors refuse to leave the Malheur National Wildlife Refuge. They're armed, and their demands aren't clear. So far, officials haven't used force to disrupt the occupation. But as the country watches to see law enforcement's next move, one Twitter user perfectly summed up what's wrong with the Oregon standoff.

The occupation grew out of a protest. According to CNN, "Protesters gathered Saturday in Burns to denounce the five-year sentencing of Dwight and Steven Hammond — father-and-son ranchers who were convicted of arson." The Hammonds stand by their 2001 story, which is that they set a fire to wipe out invasive plants and prevent future wildfires. Ammon Bundy, who is serving as spokesperson for those holed up in the refuge with weapons, told CNN that the Hammonds didn't want to sell their land to the government and now they are paying the price. But Oregon's prosecutor said the fire was a poaching coverup that demands jail time.

Bundy told CNN the protestors want restoration of, and free access to, "land and resources," but what exactly that means is unclear. Harney County Sheriff David Ward told USA Today the militia groups came claiming to support local ranchers, but, in reality, "these men had alternative motives to attempt to overthrow the county and federal government in hopes to spark a movement across the United States."

The protestors may shy away from the term "terrorists," instead using militia, since the group is armed and threatening parts of the government. Though the refusal to treat the men as an armed and dangerous group speaks to the prevalence of systemic racism in the United States. One Twitter user perfectly summarized the strange language used to talk about the group:

The racial implications of labeling the Oregon group a "militia" are a major topic of conversation, but so is the way the group is being treated. ABC News reported that members of the group set up a roadblock and took over a tower used by guards who spot wildfires. Despite these actions, the group hasn't seen any sort of intervention by law enforcement.

In face, officials are mostly keeping their distance. It's a response that counters past approaches to dealing with similar situations, especially when Muslim and black individuals are involved. The New York Times took on this topic in an article, "What if the Oregon Protesters Were Black or Muslim? Debate Ensues." Sorting through social media posts, they found that plenty of people recognize the double standard: it's highly unlikely individuals of color would be treated the same way the white protestors are now — being allowed to proceed with their plan while armed.

The New York Times reported that similar standoffs have had deadly results in the past. And, as CNN reported, the Oregon protestors are prepared to defend themselves with violence if it becomes necessary. Though that alone may be enough to constitute a threat, it appears as though law enforcement is doing little to shut the situation down.

The situation contrasts sharply to recent protests by Black Lives Matter activists. All Black Lives Matter protests began peacefully, but police dressed in riot gear and armed with tear gas often stood at the sidelines of protests. According to FOX Carolina, Surf City Police Chief Mike Halstead called Black Lives Matter a "terrorist group" on Facebook. After being forced out of his position following the controversial comments, Halstead went on Fox and Friends to reiterate his statement.

Further, when Black Lives Matter member Mercutio Southall attended and attempted to disrupt a Donald Trump rally, attendees beat him up. According to CNN, Trump responded to the incident by saying, "Maybe he should have been roughed up because it was absolutely disgusting what he was doing." Though almost all Muslims are nonviolent and don't condone violence, Trump said he would require them to register with a database or carry identification cards if he were president, according to CNN.

But what's crazy about Trump's language is that the majority of Muslims don't condone violence. Rather, violence against Muslims in the U.S. is at an all-time high. And Southall was exercising his right to protest at a rally without a weapon. In Oregon, the group of men are armed and threatening violence against people, but where are the police in riot gear with tear gas? Why are Black Lives Matter protestors — who simply want police to stop using deadly force against black people more often — treated as though they are more dangerous than an armed group of men in Oregon? The racist double standard is clear, and it needs to be addressed.