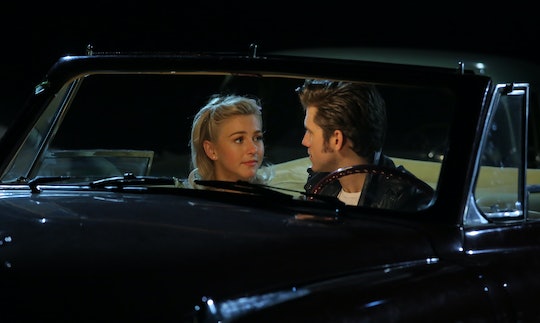 This One Tweet Proves Why 'Grease: Live's Consent Conversation Is So Important

Grease: Live definitely made an effort to bring Grease into 2016 in some regards, and their addition of male cheerleaders and attempt to diversify the cast of Rydell High didn't go unnoticed. But there's something to be said about the topic of consent in Grease: Live! — or rather, the disappointing lack of it in Grease the musical itself. And viewers definitely noticed. Sure, the musical is supposed to represent the attitudes and beliefs of the 1950s, not of 2016. But Grease: Live! didn't tweak some more upsetting dialogue and scenes that dealt directly with consent. The special, however, did succeed in jumpstarting conversation about the importance of consent, even in our musicals.

As anyone knows who watched the musical as a child, Kenickie singing the infamous "Did she put up a fight?" line during "Summer Lovin'" and Danny Zuko's drive-in ballad after he harasses Sandy give off some pretty strong "harassment is OK" vibes. The network could have wanted to stay true to the original musical in its live recreation, but having the star of the show sing a sappy song when a girl refused to sleep with him felt more '50s (translation: old-fashioned) than anything else in the show.

Some took issue with the fact that quite a few lyrics were changed in order to make the show family-friendly — yet the special didn't cut scenes depicting sexual harassment and lack of consent. "It's going to be a very family-friendly show, but with the appropriate edge that it needs to have," Marc Platt, the show's executive producer, told AdWeek. It seems viewers would rather that edge came from lyrics that hint at sex rather than an underlying message to younger viewers (or any viewers) that sexual harassment or lack of consent is okay.

This one tweet summed it up the reaction perfectly:

And if that wasn't enough, plenty of people agreed:

For the next remake, I hope they update more than just the song lyrics to reflect progress — but in the meantime, it's good to see the 1950s musical provoking a conversation about what still needs to change in 2016.