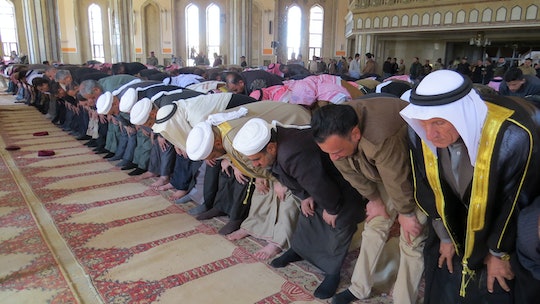 The world is mourning after a tragic terrorist attack on Brussels on Tuesday that left as many as 34 people dead and dozens more injured. As speculation mounts regarding ISIS's involvement, there is a potential, as there always is after events like these, for people to blame Islam for the cruel and unforgivable actions of these terrorists.

More Like This
If Your Kid Can’t Get Enough Dinosaurs, They’ll Love These 20 Shows
Obama Said The Sweetest Thing About His “Friend” & Family Dog Bo
15 Of JAY-Z’s Best Quotes On Parenting
Meghan Markle's "Raising The Future" T-Shirt Has A Cute Connection To Archie

Regrettably, blaming Muslims as a whole for these attacks has become second nature in our world, when misguided rage and grief swirl together to form an ugly, hungry maw that demands a scapegoat, an explanation, and an easy solution to end the violence that breaks our hearts on a far too regular basis.

While hoisting the blame on an entire religion, and treating all people who practice it with disdain may seem like an easily accessible form of catharsis, it is wholly ignorant and we know better. There is no shortage of information about the peaceful tenets of Islam. There is no shortage of information on how other major religions, like Christianity, are not immune to the threat of violent religious extremism.

Thankfully, this one tweet makes it very, very clear:

In case you didn't notice, the goal of terrorism is terror. It is inflicting widespread panic on a group of people in order to incite hatred and create deep rifts between them. Terrorist groups like ISIS seek to poison the hearts of people, to destroy the very thing that makes civilization even remotely possible: the good will between others. They seek to destroy countries that have grown strong and robust through teamwork and cross-cultural understanding from the inside out.

And it works. Look at the United States today, a whopping 15 years after the Sept. 11 attacks. The country could not possibly be more divided or filled with hatred of one another. One look at our front-running candidate in the GOP is more than enough proof of that, but so is the hateful rhetoric many people hear from one another on a daily basis. One look at a comments section on any article about Middle Eastern affairs or immigration can prove xenophobia is alive and well.

Personally, I don't have to look farther than my own childhood home, to my father, a Muslim immigrant from Syria who spends most of his time watching pundits on TV discuss what unimaginable thing might be happening next to the place he grew up and the family he grew up with.

I don't have to look much farther than my own memory, which recalls very clearly how difficult it was to navigate my newly oppositional identities of "Arab" and "New Yorker" as a 10-year-old after 9/11. A 10-year-old, who had been very lucky never to experience any form of racial discrimination or violence, suddenly confronted with the fact that people hated her father for no reason other than where he happened to be born. And not just adults, but kids on the playground, who repeated the poisonous things their parents said behind closed doors and used my father's religion as ample justification to bully me into oblivion.

When you spread this hateful discourse, people hear it, and not the people you want to. It's not the terrorists who feel your hatred, who cower in fear at your indignation. If it were, terrorism would no longer exist.

Instead, it's the nice Lebanese man who lives next door and stops, every day, to pet your dog. It's your Muslim coworker who quietly prays to Allah in the supply closet between meetings where she lights up the room. And, more heartbreaking still, it's their children, who hear whatever it is other children repeat at school later after hearing their parents use racially-charged language.

It is us who cower in fear at your indignation, not ISIS or the nebulous "terrorists." We close the blinds. We turn off the lights. We put away our hijab. We whisper our language. We deny the mosque and pretend that we are "normal." We sacrifice our own identities for fear of undeserved retribution. We do all of this while the rest of the world moves through a seemingly unending cycle of anger, sadness, resentment, and grief. And the world really is a sadder place for it.

The point is: This is exactly what terrorists want. Every day someone spreads more hateful rhetoric, and every day Muslims and Arabs withdraw deeper into ourselves — the terrorists win. And I'm pretty sure most people don't want to appease terrorists.

Let's work together to reject Islamophobia in this terribly sad time. And instead, let's focus on helping each other and lifting each other up. It is time now, more than ever, to do the really hard work of acknowledging who the real enemy is and accepting that there isn't much we as civilians can do about it. It's going to hurt. It's going be messy.

But it's also going to be undoubtedly and unequivocally worth it.