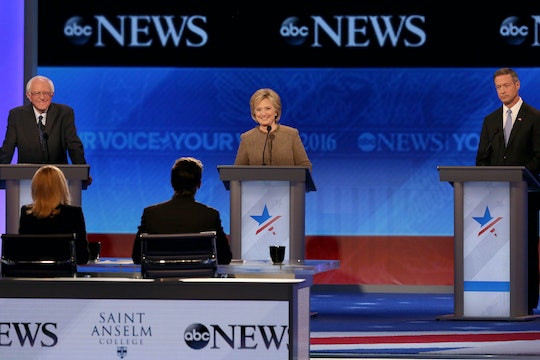 The ABC Democratic Debate covered so many issues that it was almost hard to keep up. Vermont Sen. Bernie Sanders, Former Secretary of State Hillary Clinton, Former Maryland Gov. Martin O'Malley addressed national security, ISIS, drug addiction, student debt, and more during Saturday's debate. Their answers were specific and important for many reasons, but one tweet proved why Millennials should watch the Democratic debates.

Specifically, the candidates got into a number of issues that are important to Millennials. They talked about education; Sanders has made free tuition at public universities a crucial issue of his campaign. He said "it is insane" in his mind that students pay hundreds of thousands of dollars to go to school and that many people cannot go to school simply because they can't afford it, according to The Guardian. He said he would introduce a speculation tax on Wall Street, which would make public universities free, but it would also "substantially lower interest on student debts," according to the Guardian.

Clinton said that she would try to allocate more money toward education and less toward prisons and highways at the state level, though she supports "debt-free education" rather than free tuition. And O'Malley talked about how he lowered education costs in Maryland during his time as governor, according to the Guardian. This issue, among many others, is one of the reasons millennials should be watching the Democratic debates. This one tweet put it perfectly:

During the last few GOP debates, the candidates have not led on issues that are important to millennials. In the fourth GOP debate, neurosurgeon Ben Carson defended having a lower wage or a "starter wage" for young people who are looking for jobs, according to The Washington Post. But what he doesn't understand is that lowering wages only helps to widen the gap between the rich and the poor.

Further, many of the GOP candidates don't support abortion rights, which is an issue that many millennials think should be left up to women. And none of the GOP candidates have taken a positive stance on Black Lives Matter, which aims to draw attention to police brutality against unarmed people, who are often predominantly black.

The Democratic candidates engaged with Black Lives Matter debate on police brutality on Saturday. Clinton said that trust has been lost in too many communities, where police officers don't know enough about the people they interact with on a daily basis. She said the voices of people like Black Lives Matter activists are needed, according to the Guardian:

We need to hear the voices of those men and women, and boys and girls, who feel like strangers in their own country.

The candidates then turned to drug addiction, where Sanders' answer elicited huge applause from the crowd:

Addiction is a disease and not a criminal activity, and that means radically changing the way we deal with mental health and addiction. They should be able to walk in tomorrow and get a variety of treatments that could work for them.

The Democratic candidates are engaging on issues that millennials believe are the most important, while, like CJ Pearson's tweet pointed out, Republican candidates want to hate on Millennials and ignore the issues that matter most to them.