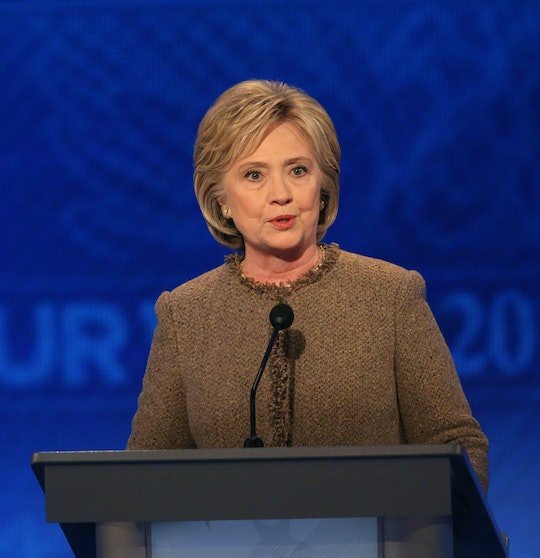 On Saturday night, three presidential hopefuls gathered on stage in New Hampshire to address and inform the country on why they believe they're best suited for the presidency. The questions focused on ISIS, Donald Trump, foreign policy, national security, gun control, Islamophobia, and war, but they also raised one very interesting question. Moderator Martha Raddatz asked Hillary Clinton about the role of a presidential spouse, and wooo, was it sexist. Among the many, many, many things that burned about that question was the obvious fact that Clinton was the only candidate on stage asked so directly about the role of a presidential spouse and what that role might look like should a woman take the Oval Office. Now, for those unaware: Hillary Clinton also serves as one of the only two women campaigning for the presidency, and the only woman who pinning for the Democratic ticket. So asking a woman what she think about the role of the presidential spouse isn't just annoying, it's a slap in the f*cking face.

Raddatz began her line of questioning saying, "Secretary Clinton, First Ladies, as you well know, have used their position to work on important causes like literacy and drug abuse, but they also supervise the menus, the flowers, the holiday ornaments, and White House decor. I know you think you know where I'm going here. You've said that Bill Clinton is a great host and loves giving tours, but may opt out of picking flower arrangements if you're elected. Bill Clinton aside, is it time to change the role of a president's spouse?"

As a woman, I'm just going to interject real quick before we get to Clinton's response. I don't give a crap what Hillary thinks about the role of the president's partner. What matters to me as a walking, talking, contributing member of this society is that we can put a president in place who understands the needs of the American people, not whether or not she's worried her partner might not trim the best roses or arrange the tables with fine China before the State Dinner. To hell with that. What I care about is whether or not we're going to elect someone to office who's competent and powerful, smart and capable, human and emotional. What I care about is someone who cares about me, not how quickly the azalea flowers are growing on the West Lawn or whether or not the Ambassador to Libya likes truffles in his butternut squash soup. He'll eat what's on his plate, damn it.

Clinton, clearly surprised by that line of questioning, responded:

Well, the role has been defined by each person who's held it. And I am very grateful for all my predecessors and my successors because each of them not only did she could to support her husband and our country, but often chose to work on important issues that were of particular concern. Obviously Mrs. Obama has been a terrific leader when it comes to young people's health, like nutrition and exercise, and has had a big impact.

So whoever is part of the family of a president has an extraordinary, uh, privilege, of not only having a front row seat to the makings of history but also making her, or maybe his, contribution.

You don't need to be a Democrat to be pissed off about this question. You don't need to be a Republican to be mad. You don't even need to be a woman to be mad, but as women, it's understandable to be irate right now. We live in the 21st century, a time when women hold positions of power freely and often. We live in a time where there is not just one, but two women competing for the role of Commander-in-Chief. And those two women, regardless of their policies and plans, kick ass when standing toe-to-toe against their male opponents. Why, again, are we asking the clear Democratic frontrunner whether or not she's concerned about the role of the presidential spouse? I know better than to ask whether or not we should be well past these exhausting gender norms because I know we're not, and as a woman, someone who'll want into a voting booth and cast her vote for a candidate for the presidency, this saddens the hell out of me.

I'm not here to pick the president's spouse. In truth, I don't even care who the president's spouse is. Do I care that they're a good person? Sure. Do I care that they adhere to preconceived notions about what the role of president's spouse should include? Absolutely not. Do I care whether or not there's pink china instead of blue? Not in the slightest. What I, and so many millions of other Millennial women, care about is that we put a competent leader in place. Nowhere on that list of credentials will I begin to list a preference for what shade of red the Christmas ornaments take when they hang from the zillions of trees that blanket the White House.

By asking the only woman on stage what she thinks about the idea that her husband, who — gasp! — is a man, would have to take on the "wifely" duties that have defined the role of First Lady, it just reinforces the idea that these roles are the only ones made for a woman, and that she'll never be smart, talented, qualified, or empowered to hold office.

No one asked Bill Clinton if he was worried that his wife would be spending time in the garden and not guarding federal policy while he was enjoying his tenure in office, so why do we suddenly fret when the reality that Bill could be the one manning the hydrangeas is within reach?

The obvious answer is that we shouldn't, but as Raddatz proved tonight, sexism is alive and well, and not even a qualified candidate for the role of president of the United States is safe from its repugnant existence. So here's a friendly reminder: Do better, America. 'Cause women won't just do it for you.