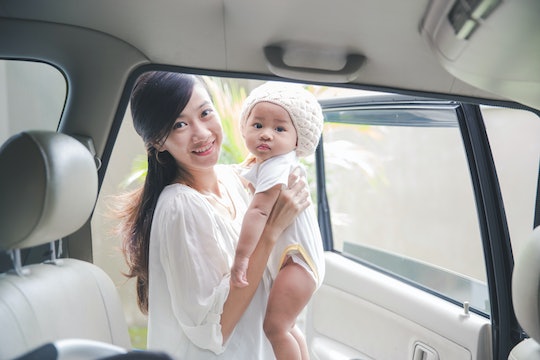 This One Type Of Mom-Shaming Could Actually Save Lives

Typically, I'm opposed to mom-shaming. Being a mom is freaking hard, and we’re all just trying to do our best to keep our kids alive and teach them to be decent human beings before we launch them into the world. Still, I can’t help but think there are some times when mom-shaming is appropriate. And honestly, the first time I was shamed by another mom, it made me a better parent.

Hear me out: I am completely on board with the idea that the world of parenting has a lot of shades of grey. I see the breastfeeding vs. formula feeding debate as a decision that has to be made on a case by case basis. When it comes to sleep training, I’m all for whatever feels right for mom during the first year. So when it comes to decisions that have two or three good options, I think it is best that non-parental parties keep their mouth shut.

At the same time, we do live in a time when we can rely heavily on science and research to help make a few of these parenting decisions a little bit easier. In certain cases, there is actually a right and a wrong way to do something, especially when it comes to ensuring our children's health and safety. When we're too quick to jump on the anti-shaming soap box, we miss the fact that some people really are trying to help us make good parenting choices. Maybe their delivery of their criticism is wrong or maybe we’re just feeling super defensive, but the intention behind the advice is to keep a baby safe.

When I was mom-shamed for the first time, I was a young first-time mother, and I was pretty much flying blind. I was the first of my friends to have kids, and even though I tried hard to make the right choices and do what was best for my child, there is only so much you can do when you’re basically clueless.

So when I turned my daughter forward facing just after her first birthday, I didn’t think anything of it. Another friend of mine had done the same, so I assumed it was the norm.

I’m embarrassed that it was so hard for me to accept her criticism. I know she only wanted what was best for my child, and she certainly got my attention.

I didn’t expect that I would get criticized by someone I barely knew for turning my baby around too soon, because I had no clue that what I had done was dangerous. When she saw my daughter and told me babies are supposed to be rear-facing until they're 2 years old, I responded defensively at first. I told her I didn’t know, and that my pediatrician hadn’t said anything about it. I also told her I knew other moms who were doing the same.

In retrospect, I’m embarrassed that it was so hard for me to accept her criticism. I know she only wanted what was best for my child, and she certainly got my attention. If it weren't for her, I probably wouldn't have switched my daughter back to rear facing until her second birthday. Who knows what the consequences could have been if she hadn’t gone out of her way to point out my parenting mistake?

My friend's words didn't just prompt me to reexamine my decision to put my daughter forward facing. After she criticized me, I realized how little I actually knew about parenting and how I had been blindly making decisions based on what the people around me were doing, instead of doing my own research first. Because of her words, I forced myself to slow down and make my own choices using information I gathered from experts, instead of just assuming I could trust the other new moms around me as my main source of information on child-rearing.

Of course, this doesn't mean that we're obligated to accept every decision made by other moms. But we wouldn’t, and shouldn’t, keep our mouths shut when parents are intentionally endangering their child. Shouldn’t the same go for parents who are endangering their kids, simply because they don’t know any better?

Ultimately, I know that I am the best person to decide what my babies need, but being willing to listen to others has made me a better mom.

I can’t help but feel like the culture of mom-shaming was to blame for my initial resistance to this criticism. Moms are constantly being criticized by their in-laws, spouses, and random people on social media. So when someone approaches them in good faith to tell them how they could be doing better, they're a lot less willing to hear them out.

Now that I look back on my experience with mom-shaming, I’m not even sure that’s the accurate term for it. I think my new friend was just looking for the best way to get her point across, and I reacted badly because I was so insecure. Now, I'm more open to hearing what others have to say, and I take the advice of friends and family into consideration before I make a decision. Ultimately, I know that I am the best person to decide what my babies need, but being willing to listen to others has made me a better mom.