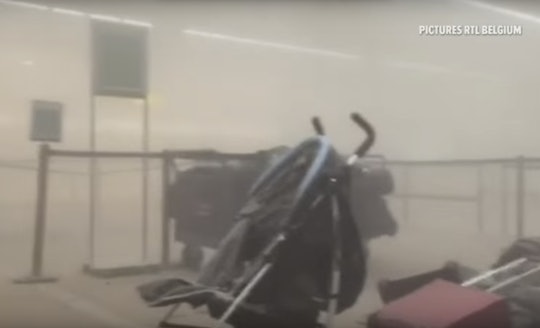 When you read about something like Tuesday's terror attacks in Brussels, video is always the first thing you want. And it's not because we're lazy and hate reading — it's because, until you see what the Brussels terror attacks looked like, there's really no way to fully grasp how unspeakably terrifying it must've been to actually be there.

The thing about watching footage of a terrorist attack (or any other instance of human suffering, really) is that there's always a very valid argument to be made against watching it: there's the notion that we're effectively using the suffering of others as entertainment, and then, especially in cases of terrorism, there's the idea that proliferating more acute awareness of the actual horror that occurred does nothing but broaden the reach of the terrorists themselves; we're sharing stark visuals of the pain they inflicted on some, thus contributing to the instillment of fear in countless others.

There's no "but" coming — all of those arguments are very fair. It's also fair to say that sharing video of instances of human suffering can make them feel more real and compelling to people for whom it might otherwise seem like a faceless, unrelateable thing happening "somewhere else, to someone else."

So, however you feel about it, and whether or not you think it's productive to watch, here is a video from Tuesday morning in Brussels, obtained by the Associated Press. It shows what the scene inside the Brussels airport looked like in the moments immediately following at least one of the two attacks that occurred there around 8 a.m. local time on Tuesday morning. Warning: It really is quite disturbing and upsetting.

There's really not much else to say. It's just unbelievably, unimaginably scary (except now, with this video, maybe not so unimaginable).