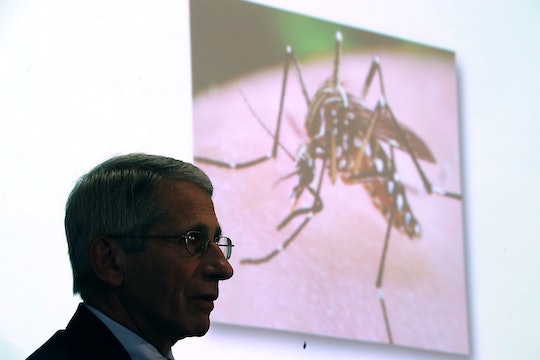 As the Zika crisis continues to worsen, a reporter has decided to call out Congress's inaction in one short tweet that speaks volumes about the current state of our government's response to Zika, or, more accurately, its lack thereof. In one stunningly telling tweet about Zika, Politico writer Dan Diamond posted a brief rundown of statistics on how many people have been affected by the mosquito-borne virus and exactly how much money Congress has sent to help them. To say the numbers are discouraging may be the understatement of the year.

In the tweet, Diamond pointed out that the number of "days since White House funding request" (217), As well as the "funding response from Congress" ($0). "Zika cases in US and territories: 18,833," he wrote, capping off the dismal news. To break that down and give some background, President Obama submitted a request to Congress for $1.9 billion to fight Zika back in February. Congress promptly failed to approve any sort of funding, and went on summer vacation for two months, reconvening just last week.

In the meantime, as The Daily Beast put it, "Zika exploded." The number of cases in Puerto Rico skyrocketed from roughly 3,000 to roughly 15,000. The virus went from something travelers worried about getting when they vacationed abroad to something transmitted by mosquitos in Florida. The CDC had to issue a warning for pregnant women, who are most at risk since the virus has been known to cause birth defects, telling them not to travel to a part of the continental United States, an unprecedented warning.

So surely that meant that Congress rushed to fix its negligence as soon as its members reconvened, right? Of course not. This is America in 2016, and not even the threat of babies born with birth defects is enough to stop partisan fighting. Democrats voted down a Republican bill that would have provided $1.1 billion because Republicans insisted on tossing in restrictions on Planned Parenthood. Now, the CDC is running out of money, while the number of infections continues to climb.

However, in some potentially encouraging news, CNN reports that, as the pressure intensifies, Republicans are discussing the removal of the Planned Parenthood restrictions, meaning that a clean bill could come up for a vote soon. Then, hopefully, those who are supposed to be protecting Americans will finally take some action on a worsening crisis. Rep. Dave Jolly, a Florida Republican, perhaps said it best when he told Congress, "If we can't get Zika funding by the end of September then we are nothing but a bunch of idiots."