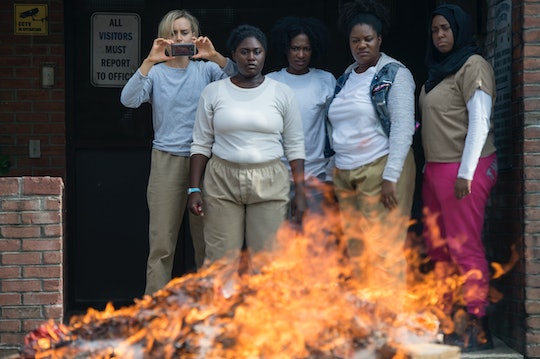 After a long hiatus, new episodes of Orange is the New Black are finally here. Season 5 of the award-winning and critically-acclaimed Netflix series is now available, and with it, viewers return to the inmates they've grown to love (or at least sympathize with) over the past four years. If you're anything like me, you probably devoured all 13 episodes of Season 4 in as many hours when it was first released — meaning that it's been a little under a year since you last checked into Litchfield. Luckily, this Orange is the New Black Season 4 recap will cover the most important points of last season, just in case you're a little rusty.

One of the things I love the most about Orange is the New Black is how it's steadily grown into such a strong ensemble series. Based on Piper Kerman's bestselling memoir about her year in a federal women's prison, the show initially put the majority of its focus on Piper Chapman. Thankfully, the writers quickly realized how many gems they had among the cast and devoted screen time to developing the backstories and character complexities of fan favorites like Taystee, Poussey, Suzanne, Red, Sophia, and Nicky.

By the time Season 4 concluded, Piper was arguably the least important person on the show — she definitely wasn't at the center of the action anymore. But let's dive into the major storylines of last season and where they've left us ahead of Season 5.

Piper has always been self-involved, but she reached full-on megalomania with her panty business on Season 4 (after selling Stella out and getting her shipped off to Max in Season 3). That led to conflict with Ruiz, who rose to be the leader of the Dominican inmates and started a company to rival Piper's.

Things came to a head when Piper inadvertently formed a White Power group with some of the racist, white inmates when she tried to shut Ruiz's operation down. One swastika-branding later, self-described "Gangsta" Piper had fallen from grace and spent much of the rest of the season being far more low-key and reconnecting with Alex.

Luschek Uses Judy King To Get Nicky Out Of Max

Nicky was missing in action for much of the beginning of Season 4, which is unfortunate because Natasha Lyonne is one of the best actresses on the show. Unfortunately, she relapsed and began doing drugs again while in Max, leading to a dramatic getting-clean storyline for her once Luschek (feeling guilty for his part in Nicky's punishment) worked with Judy King to use her celebrity status to get Nicky back at Litchfield.

In what was easily the most bizarre and hilarious subplot of the season, television cooking personality Judy King turned the tables on Cindy and her friends when they attempted to sneak photos of her in order to sell them to the paparazzi. Judy, intending to rehab her image as a racist due to some questionable TV appearance choices in her past, steered right into their plan, planting a kiss on Cindy to make it seem like the two were in a prison relationship.

Sophia Spends Most Of The Season In The SHU

Sophia has one of the most harrowing and tragic storylines of Season 4, spending much of the season in solitary confinement after her confrontation with Gloria in Season 3. She protests her unfair confinement at first, eventually losing hope and attempting suicide. Luckily, Sister Ingalls and Caputo manage to get a photo of Sophia to her wife, Crystal, leading to Sophia's eventual release and return to Litchfield.

Lolly Gets Sent To Psych After She Confesses To Murder

Poor Lolly. Flashbacks revealed that the seemingly eccentric inmate actually suffers from hallucinations due to a mental disorder (likely schizophrenia). She saved Alex from Aydin and, with Freida's help, they successfully covered his murder up — for a while, anyway. Lolly's psychosis and paranoia got the better of her, leading her to make a murder confession that no one initially took seriously. Despite Healy trying to help her, Lolly was sent off to Psych when Aydin's body was uncovered.

Maritza Is Abused By CO Humphrey

I didn't think it was possible for anyone to be worse than Pornstache, but this guy might just take the cake. He psychologically tortured Maritza, forcing her to eat a baby mouse by holding a gun to her head after he revealed that he knows about her smuggling scheme as a van driver. Aside from that, he was just consistently shady and terrible all season long, even instigating a brutal fight between Suzanne and Maureen.

Poussey Is Killed By CO Bayley

In what was easily the most devastating development of Season 4, Poussey was suddenly and unexpectedly killed when a peaceful protest by the inmates against unfair treatment by the COs escalated rapidly into violence. Bayley, an otherwise inconsequential and not particularly bad guy, used excessive force to subdue Poussey and killed her, devastating all of the inmates — but particularly Poussey's BFF Taystee and her girlfriend Soso.

Taystee Starts A Riot & Daya Gets A Gun

Enraged by Caputo's refusal to tell the truth about what happened to Poussey (he gave a press conference defending Bayley and not even saying her name), Taystee (who has worked as his assistant all season) got all the inmates riled up and started a prison riot. The season ended with Daya holding a gun on terrible Humphrey.

One thing is for sure: With a cliffhanger like this, I can hardly wait to dive right into Season 5.