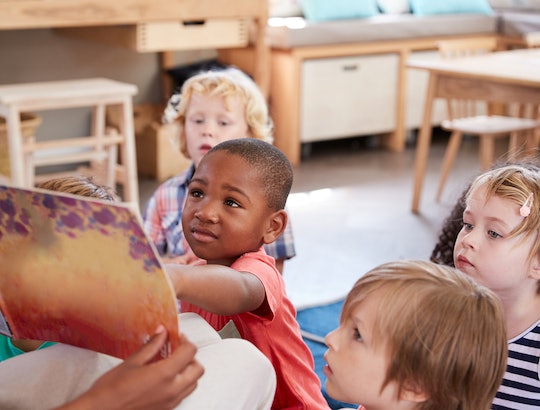 While politicians in the United States debate who can use what bathroom in public places — and President Donald Trump attempts to block transgender Americans from serving in the military — things are a bit different across the pond. How? Well, for example, one organization is going to nursery schools to teach kids about LGBT issues, and it's doing it in a super creative way: having drag queens lead storytelling sessions. The British group, Drag Queen Story Time (DQST), founded in Bristol, is similar to an American group of the same vein, Drag Queen Story Hour, but is being rolled out in nurseries across London this winter, The Daily Mail reported.

The British organization is seeking to teach young children that gender is fluid, the Evening Standard reported, by hosting "reading sessions with 'queer role models' for young children in schools, libraries, and hospitals." The group wants to expose children as young as 2 years old because they haven't learned about discrimination, yet, and DQST seeks to teach them, but in a positive manner.

While many in the United Kingdom are optimistic about these new lessons, some aren't so sure about exposing young children to such controversial topics. In the United States, Drag Queen Story Hour is only done in libraries and bookstores, and not in any government-funded daycare or childcare centers currently.

Thomas Canham is the founder of the English organization and feels strongly that showing children what drag queens look like, and teaching them about LGBT issues will have a positive impact on them. The graduate of Bristol University Law told The Daily Mail that all the drag queens within the program are well-equipped, saying that they all have, "a library with books which focus on LGBT rights, feminist fairy tales, and trans-rights issues." Specifically, he explained one book that had an important message:

On trans-themes, we’ve got a book called Introducing Teddy where the teddy realizes she’s a girl teddy, not a boy teddy, and is worried her owner won’t like her anymore. It’s a cute book.

But, that doesn't mean that everyone is on board with Drag Queen Story Time's vision and agenda. Dilys Daws, who co-authored the book, Finding Your Way With Your Baby, told The Daily Mail that introducing such young children to the concepts of gender and sexual fluidity could end up doing more harm than good.

Speaking to The Daily Mail, she said:

There’s this idea that’s sweeping the country that being transgender is an “ordinary situation”. It’s getting so much publicity that it’s getting children thinking that they might be transgender when it otherwise wouldn’t have occurred to them.

But, she also conceded that most young children do, at some point, think about their own genders and that of the opposite sex. "But it's perfectly normal for most young children to think about being the opposite sex," she told the publication. "It's probably because they are identifying with a parent or sibling." Basically, she's arguing that, while it's natural for these thoughts to arise in children, it's so easy to confuse children so young, that it could end up causing them even more perturbation.

However, parents who have gone to the American version of Drag Queen Story Time told The New York Times that it's been nothing but an enjoyable experience for both parent and child.

In fact, one of the children who has attended the readings in New York said, simply, "Drag queens make story time funner," according to The New York Times. And, in London, that seems to be the case as well. June O'Sullivan, who works for the London Early Years Foundation as the chief executive, told The Evening Standard:

By providing spaces in which children are able to see people who defy rigid gender restrictions, it allows them to imagine the world in which people can present [themselves] as they wish.

While it might not be appreciated by everyone, one thing is certain: Drag Queen Story Time seeks to teach love and tolerance, in a time when the world is quite divided. And that's not a drag at all.

More Like This
12 Of Jack Black’s Best Parenting Quotes
Kristin Bell Shared Some Sweet, Rare Photos Of Her Daughters From A Family Vacation
Netflix Reveals The Official Teaser Trailer for Wednesday
Chrissy Teigen Is Ready For Her Bump To "Just Be Huge" With This Pregnancy