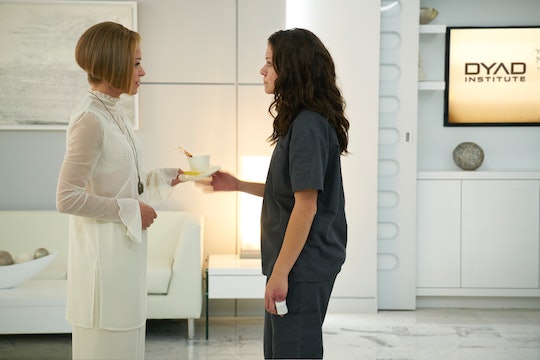 Everything You Need To Remember From 'Orphan Black' Season 4

Orphan Black has always been one of the most complex and twist-filled shows on TV. Over the past four seasons, the sci-fi clone drama has captivated fans with its increasingly complex world and increasingly evil villains — not to mention Tatiana Maslany's nuanced and skilled performances as each of the series' many clone characters. With the upcoming fifth and final season of Orphan Black, the head-spinning story of Sarah Manning and her clone sestras will finally come to an end. But where did last year's finale leave us? This Orphan Black Season 4 recap will fill you in ahead of the new season's premiere.

The show's fourth season largely focused on the introduction of bot therapy and Brightborn Industries. The bot therapy (for genetic diseases) was an offshoot of the clone experimentation and equally sketchy in a moral and ethical sense. Season 4 introduced one new clone (M.K., the paranoid and reclusive mask-wearing hacker), upped ditzy clone Krystal's involvement, and killed off two characters: Brightborn director/former Dr. Leekie associate Evie Cho and Siobhan's mother, Kendall, who is the genetic original of the clones.

Aside from that quick overview, here are the major Season 4 plot points that are likely the most important to know going into Season 5.

After a season of thinking Delphine was definitely dead, the finale revealed that she was, in fact, alive. She reunited with Cosima in an emotional scene when Cosima and Charlotte, near hypothermic, stumbled into the camp on the island where Delphine was leaving with a mysterious (and apparently not completely trustworthy) group.

P.T. Westmoreland, The Founder of Neolution, Is Also Still Alive

Except, unlike Delphine, Westmoreland is nearly 200 years old. So that's a much bigger WTF. Rachel was also about to meet him in person for the first time when viewers last saw her — Season 4 ended with a knock on her door.

Rachel Is Still The Worst

Rachel has been a complicated character since her introduction. She's run the gamut from pure evil, to somewhat sympathetic, to every shade of grey in-between. But Season 4 ended with the bob-haired clone going full villain and embracing her megalomania. She stabbed her own mother Susan Duncan, viciously attacked Sarah and nearly killed her, and took over Neolution — intending to restart both human cloning and bot therapy. Basically, all bad and scary things, making Rachel the "Big Bad" heading into the show's last season.

Sarah Was Stabbed & Left To Die On The Island

I mean, she's the main character, so she's probably fine — but still! Dire circumstances. And again: Rachel is the worst. The fight scene between the two clones was legitimately terrifying and straight out of a horror movie.

Donnie & Alison Are Hiding Out With Helena In The Woods

Alison is not a fan of camping out with Helena. Or Helena's stew.

As if things couldn't get bad enough for poor Sarah, she phoned Mrs. S from the island where she'd been stabbed, only to find out that Rachel's lackey/obsessive devotee Ferdinand had taken her adoptive mother and young daughter hostage. Viewers last saw Ferdinand holding them at gunpoint.