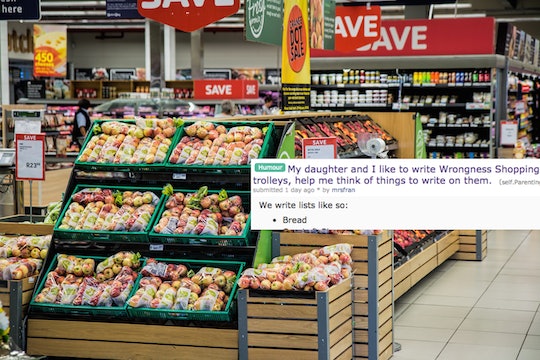 This Parent Writes “Wrong” Shopping Lists With Their Kid, & It's Absolutely Hilarious

There is something about grocery shopping that is just a nuisance to a lot of parents. When your kid is super distracted by all of the cereal and chocolate, or would rather be at home doing anything else, grocery shopping isn't the most fun thing to do in their spare time. But there are people out there who are trying to shake things up and make their shopping a little more fun. Like this parent who makes hilarious "wrong" shopping lists with their kid, and it's one of the greatest practical jokes ever.

The Parenting subreddit can serve as a great source of inspiration and this time was no exception. On Wednesday, Reddit user mrsfran took to the Parenting subreddit to share their very hilarious and very brilliant way to make grocery shopping with their child a lot less mundane: they make wacky lists of things they "need" and leave them around the store for other shoppers to find. According to mrsfran's post, a typical list will look like this — which is a not-so-typical list to anyone else:

Bread, an orange, and crisps are things you would typically find on your own grocery store list, but the rest of the items are a bit out of the ordinary and very hilarious. I can't say I've ever seen "caterpillar spread" or "slime juice" at my own Target, ever. And that's the point, according to the post.

Together, the post's author and their 7-year-old daughter write these "wrongness lists." "Obviously, we're comedic geniuses," mrsfran wrote on Reddit.

I couldn't even imagine seeing someone go to pick up the list and throw it away only to discover that someone had "the music of the forest" listed as a shopping item. Hundreds of Reddit users agree that the idea is incredible, chiming in with some great lists of their own. The list that received the most upvotes (or likes in Reddit speak) was left by Reddit user rmvelgersdyk, and it's a hilarious gem:

To play this game, all you need to do is come up with the most ridiculous and random things that you could possibly (or not possibly) buy at one store and write them down — turning to your kid's imagination for help, of course. It's that simple and just that good.

Creating lists like these fosters children using their imagination and being creative, which is pretty important for their development. According to Parenting, creativity in any kind inspires "divergent thinking," or problem solving, at a very young age. Studies have also found that children who engage in "pretend play" have a better vocabulary, are able to positively express their feelings, and have the opportunity to learn social and communication skills, and according to Psychology Today. When a child plays pretend, according to Scholastic, they are putting themselves in someone else's shoes and experimenting with different social and emotional roles in life, which are skills that they will use as an adult — even if it's just coming up with a crazy combination of words and items as part of the "wrongness list" game.