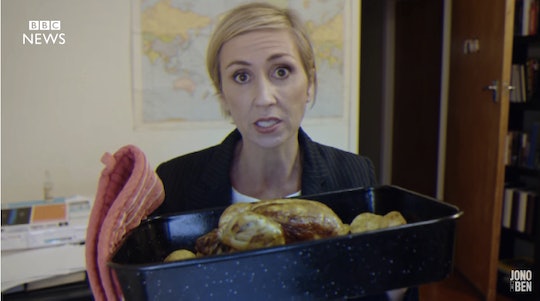 This Parody Of The BBC Dad Is A Must-Watch

The world has fallen in love with #BBCDad and his family. Professor Robert E. Kelly and his family, wife Jung-a Kim and adorable kids Marion and James, suddenly shot to internet stardom following an at-home interview Kelly gave in which his tykes suddenly crashed the Very Important Discussion, much to the horror/amusement of their parents. Though as much as most of the world can agree that the whole thing was utterly charming, there's also been plenty of commentary on the incident, including whether the mother and father handled it the "right" way, whatever that means. And now, a humorous gender-swapped take on the situation has taken off — and this parody of the BBC Dad imagines what it'd be like if he were a mom, instead.

Kelly is an associate professor of international relations in the Department of Political Science and Diplomacy at Pusan National University in South Korea. With this job title, he's sometimes called upon to talk about developments in South Korea. In that role, he recently appeared on the BBC to discuss the impeachment of South Korean president Park Geun-hye. The rest, as some might say, is history.

In the middle of the interview, Kelly's kids appeared suddenly in the background, and both Kelly and his wife had to handle the disruption on live TV. They've been praised by many for their handling of the situation — but some have questioned, how might the whole thing have looked if Kelly were a mom, instead of a dad?

In a video posted to YouTube, an account by the name of "Jono and Ben" reimagined how the interview might have looked if a working mom was interrupted instead of Kelly. The video is a humorous take on the whole "women can do anything" trope, and shows the mother completing several tasks while continuing to calmly conduct the interview.

In it, when her daughter enters the room and the lens of the camera, she welcomes her on her lap and gives the little girl milk. She also entertains a baby that rolls into the room like he's the life of the party, similar to Kelly's son, James, in the now-viral BBC clip.

In the parody video, the mother also makes dinner, irons, cleans a toilet, and even manages to defuse a bomb before it can explode. Plus, her husband briefly interrupts to ask her where his missing sock might be. Working mom, indeed.

Twitter got a kick out of the parody, with accounts like @GalstonElliot tweeting, "'BBC Dad Interview' Parody Shows What Mom Would've Done and It's SO ACCURATE"

Another user described the parody as: "On point. 🙌🏽 Woman interrupted during BBC interview - a mom's job."

Sounds like a lot of people can relate to the hypothetical experience — one that is maybe more reality than fiction for many moms.

More Like This
Kim Kardashian Stars In Hilarious House Of The Dragon Parody, The Targashians
Prince George Reportedly Got Sassy In A Fight With A Classmate
Disney World Closes For 2 Days Due To Hurricane Ian
Sarah Jessica Parker Brought Her 13-Year-Old Twins To See ‘Hocus Pocus 2’