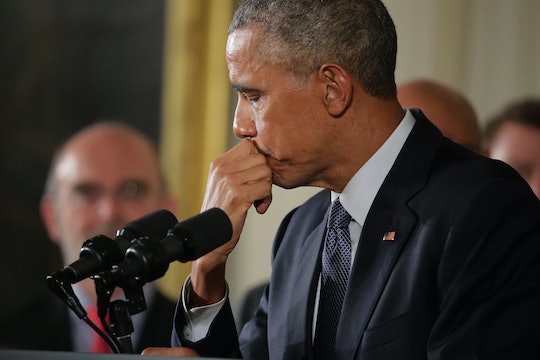 Gun violence has been an outright epidemic in the United States in the last few years, and in 2015, the discussion reached an all-time high. Incidentally, 2015 was also the year that more young Americans were killed by guns than by cars, according to Forbes. President Barack Obama is on his way out of office, but he seems hellbent on making one final, incredibly necessary change for the U.S.: he wants to increase gun control and help slow gun violence. Obama has been on Congress' case for a while now to crack down on gun laws, to little avail — but today, he announced that he would be sidestepping Congress to implement mandatory background checks for all gun purchases, among other measures. Obama's speech on his gun control executive action was important, but one part perfectly explained why gun rights activists aren't the victims here.

Gun rights activists and gun lobbyists will — of course — be upset at the measures drawn today. But should they be? Yes, the Second Amendment does guarantee Americans have a right to bear arms. As Obama said: "I taught constitutional law. I get it." But what gun rights activists seem to forget is that gun control (or the lack of it) that currently exists is trampling all over other's rights — even the right to life. Obama said it best in his speech on Tuesday, according to a transcription from the Washington Post:

Second Amendment rights are important, but there are other rights we care about as well, and we have to be able to balance them. Because our right to worship freely and safely — that right was denied to Christians in Charleston, South Carolina, and that was denied Jews in Kansas City, and that was denied Muslims in Chapel Hill, and Sikhs in Oak Creek. They have rights too. Our right to peaceful assembly — that right was robbed from moviegoers in Aurora and Lafayette. Our unalienable right to life, liberty, and the pursuit of happiness — those rights were stripped from college kids in Blacksburg and Santa Barbara and from high schoolers at Columbine. And from first graders at Newtown. First graders. And from every family who never imagined that their loved one would be taken from our lives by a bullet from a gun.

The argument I seem to hear, often, from gun rights advocates is that "guns don't kill people — people kill people." It's an argument that advocates tend to use when arguing against even the most minimal increases to gun control, but it's a faulty argument. Yes, sure, people are behind the guns that kill people — but those same would-be murderers would do much less harm when armed with tasers or knives. "The United States of America is not the only country on earth with violent or dangerous people. We are not inherently more prone to violence," Obama said in his speech Tuesday, according to the Post. "But we are the only advanced country on earth that sees this kind of mass violence erupt with this kind of frequency. It doesn't happen in other advanced countries. It's not even close."

Obama made it clear that we curtail certain rights in order to keep people safe, and curtailing gun rights to keep people safe seems totally reasonable. "I mean, think about it, we all believe in the First Amendment, the guarantee of free speech, but we accept that you can't yell 'Fire!' in a theater," Obama said during his speech.

You also cannot use your right to free speech, legally, to incite violence, sexually harass, or threaten others. "We understand there are some constraints on our freedom in order to protect innocent people," Obama said.

So, gun rights advocates can put their Second Amendment away sometimes, because it protects more people. Yes, people have the right to bear arms. But gun laws, as they stand, are visibly not working. They are serving as tools to violate the right to peacefully assemble, to worship freely, to live. In the frenzy of finger-pointing that breaks out whenever someone (ahem, Obama) attempts to make much-needed changes to gun laws, gun right activists often forget the victims who suffer the costs of gun lobby stubbornness.

Gun rights activists need to take a step back to realize that they're staunch views are causing more harm than good. If their firm grip on their guns is really for their safety and the safety of the United States, they'd realize that Obama's administrative action is actually on their side.