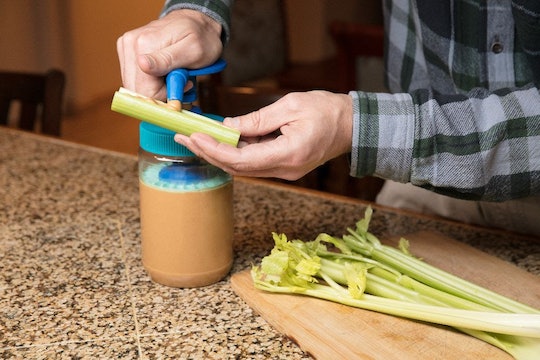 A new piece of kitchen gear has just hit the market for patent, and TBH, all I can think is how this hasn't existed sooner. Announced earlier this week, there's a new product called the Peanut Butter Pump that aims to change the way you make your kid's peanut butter and jelly, ants on a log, and all the rest of your favorite treats.

If you really think about it, there's no extent to what we can stick a pump lid on — we do it on bathroom products and mason jars for easy, mess-free pouring, so why wouldn't we eventually figure out that it would also be perfect for one of our favorite, but stickiest, nut butters? (BTW, everything from jelly to ketchup is already available in a squirt-able container, so, this was naturally going to be next.)

According to a press release from Peanut Butter Ventures, the product officially launched an Indigogo campaign on Feb. 13, with the goal of earning $20,000 for production. Those who contribute may be eligible to receive limited edition products for only $20, as well as "several other rewards." At the time of writing, the campaign had already grossed over $8,000, because TBH, people recognize a really good idea when they see it.

As for the logistics of the product, the company also said in the press release that the patent-pending device features a "sliding airlock mechanism that ensures a perfect pump every time by locking out the air to create suction that pulls the airlock downward with each pump."

The company explained that this setup ensures a consistent flow of peanut butter throughout the entirety of its use. Additionally, the pump cleans the inside of the jar as it removes peanut butter, so you aren't going to be stuck scarping out the sides before you toss it in recycling (or, let's be honest, using your finger to get every last bite, there's no shame here).

The Peanut Butter Pump also comes with two nozzle variations, one that's a ribbon, and another that's a stream. The ribbon is great for sandwiches, while the stream is great for snacks, smoothies and other recipes that involve a serving of peanut butter. Either way, each serving dishes out a fixed amount, so you can actually measure your intake pretty accurately each time.

Finally, the pump offers a limited lifetime warranty for all parts, given that it is used under "normal household" circumstances. The exception is for valves and sliding airlock, which may require eventual replacement with wear.

Peanut Butter Ventures, which is located in Burbank, California. was founded just last year, and their goal with this product is to take the hassle out of cooking with sticky, messy substances. As the company said in the press release:

We believe peanut butter is a healthy natural food that is undervalued because it is difficult to manage. The Peanut Butter Pump is designed to make peanut butter easier to use and more convenient than ever before, and to elevate peanut butter from childhood nostalgia back into our fast-paced modern lifestyle, in everything from healthy protein snacks to sweet desserts and savory sauces.

Overall, it seems like this new product is potentially about to hit our store shelves or Amazon carts. If you want to get in on it first, you can consider donating a bit to their campaign to get it started (there are bonuses and special offers if you do so). If not, you'll just have to hang tight and wait for the company to start mass production, because honestly, it seems entirely unlikely that that won't be the case.

More Like This
HelloFresh Is Releasing Spaghetti Meal Kits Inspired By Buddy The Elf
10 Thanksgiving Desserts That Aren’t Pumpkin Pie
20 Holiday Gifts For Neighbors They’re Sure To Love
Store-Bought Meals Didn’t Ruin Our Holidays. They Made Them.