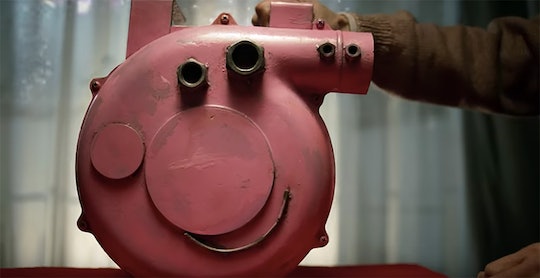 Watch out Baby Shark — there's a new viral video in town. This time kids can't get enough of a Peppa Pig short film titled, "What Is Peppa?" The heartfelt project centers around a grandfather who is on a mission to give his grandson a Peppa Pig-themed gift for the Chinese New Year, which just so happens to be the Year of the Pig.

On Feb. 5, Canada’s Entertainment One and China’s Alibaba Pictures will release a feature-length film in Mandarin called, Peppa Pig Celebrates Chinese New Year. The exciting event will commemorate the Year of the Pig, and it will screen in theaters across China. The movie "tells the story of two Chinese children and Peppa—a muddy-puddle-loving anthropomorphic pig—celebrating the holiday with their families," according to Quartzy.

In anticipation of the movie's release, the company Alibaba Group released a six-minute short on Friday, Jan. 18 about a devoted grandfather who learns about Peppa Pig for the sake of his grandson.

The film — which has English subtitles — starts off with the grandfather on a cellphone asking his grandson what gifts he'd like for the New Year. When the boy mentions "Pei Qi" — aka Peppa Pig — the grandfather shouts in reply: "What is Pei Qi?"

The moment is funny and relatable because I imagine a lot of grandparents out there struggle to keep up with the latest kids trends.

Undeterred by his confusion about Pei Qi, the grandfather sets out on a mission to create the mysterious character for his beloved grandson. And after gleaning some information about what Pei Qi looks like, he —along with the help of residents in his rural town — creates the animated icon out of metal.

The quest ends with the proud grandfather unveiling the gift amid a New Year celebration, a moment that the grandson responds to with pure delight.

By the video's end, the entire town — including the grandfather's older friends — is enamored with Peppa.

Although I'm not well-versed in the magic of Peppa Pig, I really enjoyed this video. Not only does it highlight the love that exists between a grandparent and grandchild, but it also pays homage to teamwork.

Oh, and I did I mention that it's funny? Case in point: At the end of the film, the grandfather mentions to a pal that the Peppa Pig song is his new ringtone.

Many people out there seemingly agree with my thoughts on "What is Peppa?" because the video has 97,295 views on YouTube as of Tuesday.

Additionally, the short has racked up "over 1.5 billion views in less than one week" on social media, according to Animation Magazine.

As for why the video is so popular? It could have something to do with the film's important themes.

“Besides drawing attention to the film, what I wanted to do through this promotional trailer was to share the same values that are highlighted in the film – family, reunion, harmony and love," director Zhang Dapeng told Animation Magazine.

Mission accomplished, Dapeng. "What is Peppa" is the perfect ode to family, and it's a great way to kick off the Year of the Pig.