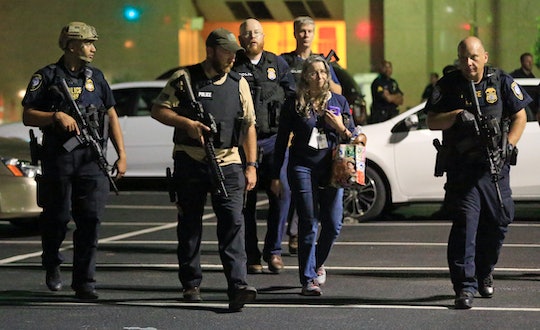 When attackers shot and killed four Dallas police officers and a DART officer on Thursday night, another layer of pain was added to the struggle for equality under the law. The officers had been gathered to supervise and protect protesters honoring the lives of two black men who were killed by officers this week, Alton Sterling and Philando Castile. It's devastating for a city in mourning to be greeted with more senseless killing. The community has risen up in response to this tragedy, and this photo following the Dallas shootings shows the community's unbearable pain.

According to the National Law Enforcement Officers Memorial Fund, the shooting was the single deadliest day for law enforcement since Sept. 11, 2001, and it hit Dallas DART officers particularly hard. One of the victims was DART officer Brent Thompson. He joined the agency in 2009 and had recently married another DART officer, according to WFAA. In a statement for the agency, Morgan Lyons said, "Our hearts are broken. This is something that touches every part of our organization. We have received countless expressions of support and sympathy from around the world through the evening. We are grateful for every message."

According to KGW News, three other DART officers were also wounded, but not fatally. They have been identified as Omar Cannon, who joined DART in July 2009, Misty McBride, who joined in 2010, and Jesus Retana, who joined in 2006. One civilian was caught in the crossfire and was shot in the calf. On Friday morning, they were undergoing surgery.

For the everyone in downtown Dallas on Thursday night — protesters, bystanders, and officers alike — the scene quickly turned chaotic and nightmarish. According to the Associated Press, Dallas Police Chief David Brown said snipers began shooting from an elevated position around 9 p.m. The crowd was assaulted "ambush-style," with many shot in the back as they fled for cover. He added, "Give our officers strength to catch these suspects and bring them to justice tonight." While one suspect was killed during a standoff with police officers in a parking garage, three others are currently in custody, though no details about their identities or motives have yet been released.