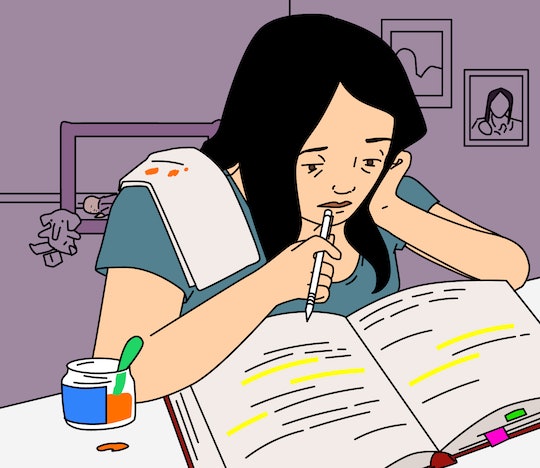 This Photo Of A Teacher Babysitting A Student's 10-Month-Old Is So Heartwarming, And 4 Other Places We Should Totally Be Able To Bring Our Kids — PHOTO

Having a baby is rewarding and wonderful and super cute most of the time. It's also profoundly difficult in a million different ways, not the least of which is finding time to get anything done. Figuring out how to go to school when you have a child has to be one of the most problematic tasks a mom can face. And I say that speaking as an adult who finished school by the time I had kids, by the way, so I can’t begin to imagine the challenges that a teen mother needs to surmount as she tries to get her schooling back on track. That’s why, when I hear about people stepping up to support these young women, like this teacher did for student and mom Kimmy Lopez, my heart could explode with all the feelings it has.

At the time this photo was taken, Lopez was living in a shelter with her 10-month-old son, unable to afford daycare while enrolled in a re-engagement program in order to finish her high school education. When she approached school administrators to explain her situation, they told her to bring her son to school. Just like that, she had a team around her, taking care of her child in the office while she completed her classes.

Stories like this prove that we have it the wrong way around when it comes to raising our kids, and our kids’ kids: No one is an island, and expecting mothers to do it all themselves is a surefire way to set them up for some sort of failure. This is especially true for mothers who are already at a socioeconomic disadvantage, particularly in areas where they're making awesome attempts at improving their lives and the potential for their kids' lives.

I’ve never really understood the mentality so many employers have that paints parenthood as a negative factor in an employee's worth. I know a bottom line is a bottom line, and when employee time gets directed away from profitability and productivity, there’s a feeling that a company is somehow losing out. But what if that was the wrong attitude? What if, when a woman came to her employer to explain that she couldn’t afford both rent and daycare, the employer offered to help out? And spoiler: Any mother that’s completely stressed out about finding a way to take care of her family and pay her bills and also be a good employee is undoubtedly going to be infinitely more productive if she knows her child is being taken care of.

I don’t know. Maybe it’s just me who feels that way (another spoiler: it's not). The fact is, the cards are still stacked against moms — especially if they're young, poor, and/or single — which makes it even more important when teachers like Tommy Guy step up to help.

So where else could moms use some extra help, to do the things we need to do? Well, we thought of 5 other places it would be nice to bring our kids: