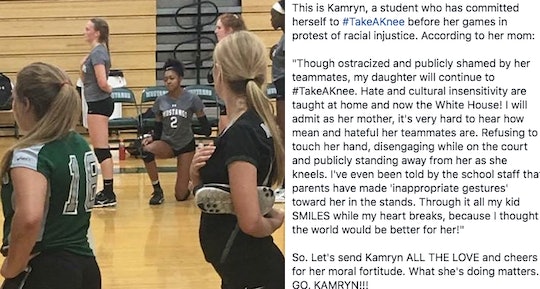 This Photo Of A Volleyball Player Taking A Knee Speaks Volumes

Athletes are often kids' first role models. On and off the court, the examples set can form character values that carry onto adulthood. This photo of a volleyball player taking a knee at her high school match shows that the actions of Colin Kaepernick, Eric Reid, and other professional athletes have made waves throughout younger generations, inspiring activism. Unfortunately, as with Kaepernick and Reid, the volleyball player has been discriminated against for her strong stance. Given all that she's experienced thus far, her mother's commentary on the matter is especially powerful.

The photo, posted on the Awesomely Luvvie blog's Facebook page, pictures Kamryn who "has committed herself to #TakeAKnee before her games in protest of racial injustice," according to the post. In the image, Kamryn kneels while her teammates and opponents stand, hands-over-hearts. Kamryn's mother shared with the blog: "Though ostracized and publicly shamed by her teammates, my daughter will continue to #TakeAKnee," lamenting that "hate and cultural insensitivity are taught at home and now the White House!"

Kamryn's mother (whose identity has been kept anonymous in order to keep her family safe) has had a tough time watching her child suffer for her protest. "I will admit as her mother, it's very hard to hear how mean and hateful her teammates are refusing to touch her hand, disengaging while on the court and publicly standing away from her as she kneels," she wrote in the post.

The opposition has been felt not only through teammates, but through parents as well, as school staff members have reported that "parents have made 'inappropriate gestures' toward [Kamryn]."

But Kamryn is resolute: "Through it all my kid SMILES," her mother noted, "while my heart breaks, because I thought the world would be better for her!" Commenters on the Facebook post have all cheered Kamryn on, as the page's manager vowed that users posting comments of "hate or stupidity ... will get blocked."

Kamryn's actions were inspired by a movement that began in the national spotlight. A little over a year ago, NFL player Kaepernick sat out during the national anthem, later transitioning to the iconic kneel that so many other athletes have adopted since. Kaepernick's intention was to protest police brutality in the most respectful way possible, but his actions were met with criticism and hate by viewers, fans, and higher-ups. After Kaepernick became a symbol of protest, his NFL career suffered, resulting in his eventual unemployment.

So why has the fervor for protest resurged, and why are student athletes partaking in it? President Donald Trump drew attention to the matter in a Twitter rant this past weekend, calling for NFL fans to protest games "until players stop disrespecting our Flag & Country." Trump warped Kaepernick's protest of police brutality, claiming instead that it was a boycott of the national anthem. "The issue of kneeling has nothing to do with race. It is about respect for our Country, Flag and National Anthem. NFL must respect this," Trump tweeted Monday morning.

For Kaepernick and Kamryn, highlighting injustice is worth the backlash. Due to Trump's passionate opposition to the protest, other athletes are demonstrating on the field now, too. NFL teams took differing stances on the matter, some uniting alongside the kneelers; the Seattle Seahawks, for instance, stayed off of the field for the anthem to protest "injustice that has plagued people of color in this country."

Kamryn's photo and the response thereafter show that small gestures make lasting impacts. This photo's a testament to Kamryn's bravery and willingness to highlight an issue that all Americans should acknowledge — the safety and wellbeing of our citizens, specifically black Americans who've suffered disproportionately at the hands of unjust institutions.

Hopefully by the end of the season, Kamryn will have some teammates kneeling on her side. But until then she has a supportive mother and an online community who are immensely grateful for her strength and courage.