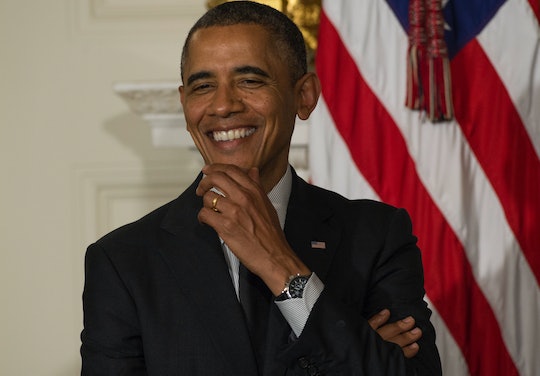 'Tis the season to be jolly, fa la la la la, la la la! (Am I right?) Just in case your spirits weren't already merry and bright this holiday season, I'd like to point you in the direction of something that will surely things along. Because this photo of Barack Obama holding a baby while on vacation is true bliss.

On Sunday, Dec. 22, the former POTUS was enjoying his annual holiday vacation in Hawaii when he encountered a mother, Krystle Ilar, and her infant son, Levi, HawaiiNewsNow reported. Or rather, the mom heard he was at hole 18 at Mid-Pacific Country Club in Lanikai, Oahu — and since she was already there, she decided to to seek him out. Once the former president completed his round of golf, he signed autographs for onlookers. Obama also asked to hold Ilar's 2-month-old. And the new mom gladly agreed.

In a video of Levi and the president, you can see him say hello and shake little Levi’s hand, while holding him. “As I watched him hold my son, my heart overflowed. He was so genuine and so gentle with my son, Levi,” Ilar told HuffPost. “The best part of meeting him was to see how much aloha he had to share."

Ilar went on to tell HuffPost that she and her husband look forward to one day sharing with their son that he was held by the 44th president of the United States of America. “It’ll be a lesson to him on how no matter who you are in this world, it’s always important to stay true to your heart, remain humble, and always show Aloha to everyone,” she added. “And omg, a former president carried you! WOW!!!”

Unsurprisingly, social media practically melted from the adorableness of it all. One Twitter user wrote, "The people's president...kind, caring, compassionate and human. Ya gotta love the example he sets. Much more than presidential. Mele Kalikimaka President Obama."

Yet another person pointed out the stark contrast between how the current and former presidents are spending their holiday breaks, writing, "President Obama is in Hawaii relaxing, playing golf and kissing cute babies. Trump has been impeached, & called out by a christian global ministry."

Of course, this isn't the first time former president Obama has paused to have a photo taken with an infant (Far from it, actually.) Just last year in Hawaii, a similar situation played out while on the golf course. That time around, Obama adorably held and kissed a baby girl named Paisleigh.

"To have the first black President ever to initiate holding our daughter, let alone kissing her on the forehead, has to be one of the most pivotal moments of any parent's life," the 7-week-old's mom, Chelcie Edwards, told the blog Because of Them We Can. "For our little girl to be in the hands of a man that is so influential, yet still so humble, and allowing her to experience something many will never get to experience is a blessing from God within itself. It's just one of those things that's just indescribable."

Witnessing a former POTUS holding your child is definitely a unique gift ahead of the holidays. And I'm sure it's one little Levi's parents will never forget. All I have to say is this: Thanks, Obama — for the smile, that is.

More Like This
30 Adorable Baby Halloween Costumes, From Animals To Avocados
The Best Halloween Family Pajamas To Match Your Boos
25 Mother And Daughter Halloween Costume Ideas That Are Cute And Spooky
Scott Calvin Is Ready To Retire In The Santa Clauses Series Coming To Disney+