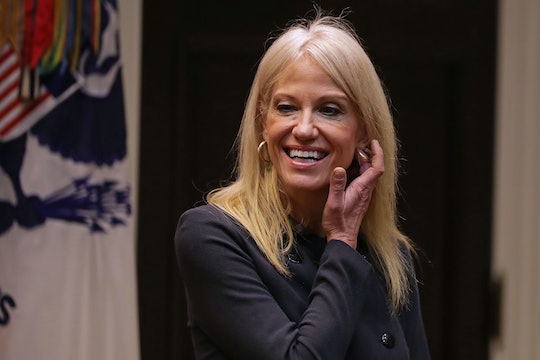 People Are Upset Over This Pic Of Kellyanne Conway

On Monday, President Trump met with representatives from the nation's historically black colleges in the Oval Office. It was one of many meetings the president has held at the White House since he took office. When press photos from the meeting began making the rounds on Twitter, several layers of controversy began to emerge. This photo of Kellyanne Conway on the Oval Office couch is making people freak out — but many of them are perturbed for all the wrong reasons.

When the photo was posted, the responses fell into something of a hierarchy, starting with the more obvious and then distilling down into some of the deeper issues that require a little extrapolating. The photo depicts Conway in the foreground taking a photo of the group with what we can assume is her phone. At first, a lot of people on Twitter were just mad that she was sitting with her feet on a couch in the White House — which is, if not a piece of antique furniture, is at least covered in expensive upholstery. Of course, there's also just the somewhat antiquated rules of etiquette that would dictate that having your feet on the furniture is a faux pas in general, whether you're a guest of the White House or your neighbor.

Plenty of people were also miffed that Conway was in the Oval Office at all, and furthermore that she appears to be taking pictures with her personal phone, when the White House has official photographers to document meetings (especially those in the Oval Office which are, you know, kind of sacrosanct).

The other photo from the same meeting shows Conway in a slightly different position (feet still on the couch cushions, much to Twitter's chagrin) that actually spawned a far more pertinent conversation that went beyond the basic tenants of etiquette. In fact, looking at the responses on social media, it seems like a lot of people were ready to get offended on behalf of the couch before remarking that Conway's casual tone is disrespectful to the room full of esteemed educational leaders she's surrounded by. As many have pointed out on social media, the real commentary here is not about furniture — it's about race.

While social media continues to find fault with Conway's casual attitude in the photo, those who are making it about the fact that her feet are on a piece of furniture are completely missing the larger point. The photos capture what many are calling the casual attitude and dismissive body language of a white woman of privilege who, either consciously or subconsciously, doesn't feel that the people she's in the room with are worthy of her professional conduct and respect. Of course, to any person of color living in the United States, Conway's behavior isn't surprising, and it's representative of the larger issue of white women's privilege — which, frankly, is what got Trump in the White House in the first place.