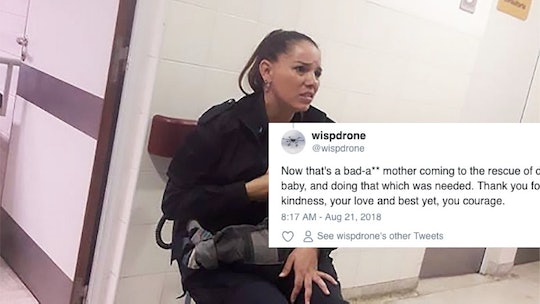 There are a lot of heartwarming images of breastfeeding out there on the internet, all the way from parents proudly nourishing their babies in public to snaps of people's breastfeeding triumphs. But just when you thought the act of breastfeeding couldn't get any more beautiful, this touching photo of an on-duty police officer in Argentina breastfeeding a hungry baby went viral on Monday. Per Argentine news outlet Clarin, the officer came in contact with the 6-month-baby in question and its five other siblings at a local hospital because their mother was no longer in the position to take care of them. Not only is the photo a moving tribute to breastfeeding, but the story behind it highlights all that's good in the world.

Marcos Heredia, a police officer based in La Plata, Buenos Aires, shared a special Facebook post on Aug. 14 featuring his colleague, Celeste Jaqueline Ayala, breastfeeding a baby at a local hospital. In the snap that has since garnered upwards of 111,000 shares, a concerned looking Ayala holds her exposed breast as she breastfeeds the infant. The juxtaposition between Ayala's worried appearance and the baby's look of contentment is as heart-wrenching as it is inspiring. And the photo proves that the language of breastfeeding is universal — no matter whether you breastfeed or not, the sentiment of the image resonates on a deep level.

"I want to make public this great gesture of love that you made today with that baby, who you did not know, but for who you did not hesitate to act like a mother," Heredia penned in the post translated from Spanish to English, according to The Orlando Sentinel. "Things like that are not seen every day." Well said. Ayala has reached hero status in my book.

Apparently, Ayala felt compelled to take action after she heard the baby crying. Ayala, who is a mother herself, recognized the screams as hungry cries, and she quickly asked hospital staffers for permission to nurse the child. "I noticed that he was hungry, as he was putting his hand into his mouth, so I asked to hug him and breastfeed him," Ayala explained, Metro reported. "It was a sad moment, it broke my soul seeing him like this, society should be sensitive to the issues affecting children, it cannot keep happening."

As for the baby, the little one and its five other siblings were brought to the hospital by social workers for a medical examination. The children's mother wasn't able to provide for them any longer, and they were on their way to foster care when Ayala came into contact with them. One can only hope the baby and its siblings will get the care they need going forward.

In the days since Heredia shared the post, thousands of people have left comments praising Ayala's actions, while others took to Twitter to commend her quick thinking.

"Now that's a bad-a** mother coming to the rescue of distressed baby, and doing that which was needed," one person wrote on Twitter. "Thank you for your kindness, your love and best yet, you courage."

"In a messed up world, here's a simple act of love and generosity," someone else said. "Celeste Ayala as a mother I salute you."

"Celeste Ayala, you are a beautiful woman with a beautiful soul," a commenter chimed in. "Bless you for caring about that poor helpless child."

"#CelesteAyala you have shown the world that humanity still exist," one admirer wrote. "Hats off to you for your kindness & good bless the baby."

Ayala also received a promotion shortly after the photo went viral. Cristian Ritondo, minister of security of the Province of Buenos Aires, said in a tweet, according to HuffPost: "We wanted to thank you in person for that gesture of spontaneous love that managed to calm the baby's cry."

So, here's to Ayala highlighting the beauty of breastfeeding and human kindness. The photo is an important reminder of all the good that exists in the world.