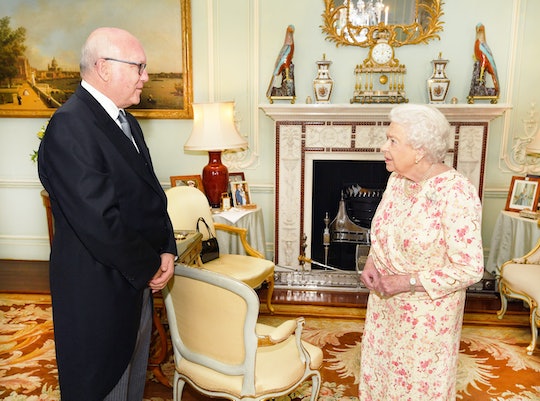 Queen Elizabeth II might possibly be one of the most powerful people in the world. So, needless to say, her opinion and approval on most things matters to a lot of people, including those in her family. But it's likely that her grandson, Prince Harry, and his new wife, Meghan Markle, have nothing to worry about. That's because, thanks to some internet sleuths, a new photo of Prince Harry and Meghan Markle spotted in Queen Elizabeth's home that shows they've definitely earned her approval and have made her proud.

A lot can be said about a person's space and how they choose to decorate it. Home is where people spend the majority of their time, where they get cozy and enjoy themselves when they're not at work or out and about. The items in one's home add personality and say something about who they are. So, it shouldn't come as a surprise that Queen Elizabeth's home reveals a lot about her personality, too.

In fact, a never-before-seen photo of Prince Harry and Markle, according to Good Housekeeping, spotted in the queen's home on Wednesday has given some people the idea that she is super happy for the newlywed couple. Royal watchers (they're given that name for a reason) spotted this photo of Prince Harry and Markle on a small table in her Buckingham Palace home during a meeting with the Australian High Commissioner to the United Kingdom, according to Us Weekly.

In the photo, Markle can be seen wearing a pale blue dress with her arm on Prince Harry's chest, according to Good Housekeeping. It's a shame that fans have never seen the photo before, because a close-up view of the shot shows that Markle and Prince Harry looking absolutely stunning.

The photo reportedly could have been an outtake from Prince Harry and Markle's engagement photo shoot, according to Hello! Magazine. But given the fact that Markle was not wearing a similar dress to the one in this new photo, as she was in her engagement shoot, that theory isn't necessarily the strongest. However, according to Hello!, the royal family could have kept a few photos from the shoot for their "own personal use." And there certainly could've been some outtakes and costume changes, right?

It is a little unclear why the royal family might want to keep this photo for their own use and not release it to the public, who can't get enough of the couple and their first public moments together in marriage. But, what is clear, is that Queen Elizabeth is just as invested in Prince Harry and Markle as everyone, given how this photo gets a prime spot on the table in her home.

Queen Elizabeth has every reason to be proud of her grandson and new granddaughter. And from the sounds of it, her relationship with both of them is incredibly solid. In a 2016 interview with the BBC, according to Hello!, Prince Harry said that he has a very balanced relationship with his grandmother. "I still view her more as the Queen than my grandmother," Prince Harry said, according to Hello!. "You have this huge amount of respect for your boss and I always view her as my boss — but occasionally my grandmother."

Markle reportedly has just as much respect for Queen Elizabeth, according to Harper's Bazaar. During her post-engagement interview with Prince Harry in 2017, Markle stated that she admires Queen Elizabeth, not only for her very important job and title but for her role as a grandmother. "When I met her I had such a deep understanding, and, of course, incredible respect for being able to have that time with her, and she's an incredible woman," Markle said, according to Harper's Bazaar.

Judging by the placement of this photo of Markle and Prince Harry in Queen Elizabeth's home, the feeling is likely mutual.