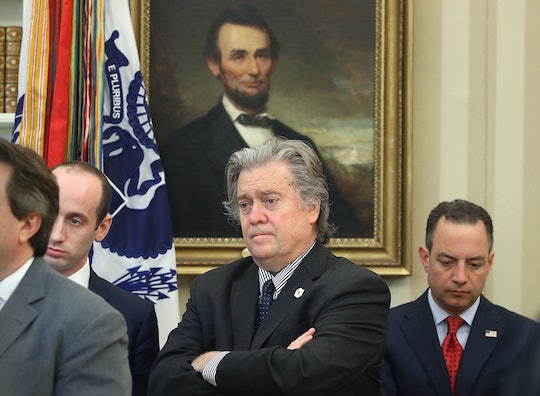 For all the controversy and speculation over White House Chief Strategist Steve Bannon's role in the Trump administration, tangible details about what he's actually doing have remained somewhat scarce. But a new photo shared on social media Tuesday has unintentionally provided the public with insight into Bannon's priorities – and unsurprisingly, it's pretty unsettling. According to CNN, it has been previously reported that the former Breitbart head installed giant whiteboards on the walls of his White House office, and that he used them to list campaign promises and legislative accomplishments. But this photo of Steve Bannon's whiteboard to-do list is visual proof not only that the boards really do exist, but that they are full of items that likely won't sit well with many American voters.

On Tuesday, Orthodox rabbi, author, TV personality and occasional Breitbart contributor Rabbi Shmuley Boteach, visited the White House for an event organized to honor Israel Independence Day. While at the event, Boteach posed a series of photos to his Twitter account, many of which featured the rabbi posing with various Republican lawmakers and members of the Trump administration, including South Carolina Sen. Lindsey Graham, Texas Sen. Ted Cruz, and White House Press Secretary Sean Spicer (someone Boteach described as being "a warm gentleman"). But it was the photo he took with Bannon that really caught Twitter users' attention, because they happened to be standing right in front of Bannon's all-important whiteboards.

Though the boards were obviously not the focal point of the photo — it's likely that no one even realized they were in the background — it didn't take long for those on social media to begin attempting to determine exactly what Bannon and his team had written on them. And while not all of the writing is visible, it looks as though the board is mostly made up of an extensive list of President Donald Trump's various campaign promises, organized by category, with checkmarks assigned to items that have already been accomplished.

So what made the list? According to BuzzFeed, there are the usual suspects: repeal and replace Obamacare, lower the corporate tax rate, hire 5,000 more border patrol agents as part of Trump's immigration plan, and suspend the Syrian refugee program (something which received a checkmark, despite the fact that the move has been blocked by federal courts). Also making an appearance — though clearly without a checkmark? A partial note that said, "Build the Border Wall and eventually make Mexico..."

Bannon's whiteboard also included a note to "cancel all federal funding to sanctuary cities," despite the fact that, as with the refugee program suspension, that policy has been blocked by a judge. According to The Guardian, on Tuesday a California judge issued a nationwide injunction blocking Trump's executive order that would have made that pledge actually happen. Despite those setbacks, Bannon also seems to have made a point to note some more ambitious goals as well, such as a plan to “finally complete the biometric entry-exit visa tracker” and to “sunset our visa laws so that Congress is forced to revisit and revise," along with the often-cited Trump campaign pledge to "defeat ISIS."

As CNN noted, it doesn't actually appear as though there were items visible on the whiteboard that were entirely new or surprising, but there's definitely something particularly uncomfortable about seeing them written down in dry erase marker in a White House office, and shared in a casual Twitter photo. Especially because so many of the items on the list are ultimately centered on policies reinforcing discriminatory ideas about refugees and immigrants.

That might not seem all that hard to believe though, especially since Bannon has long been criticized for having allegedly racist and xenophobic views. Recent news stories have also speculated that Bannon hasn't been getting along well with other members of the Trump administration, particularly Trump's son-in-law and senior adviser Jared Kushner. According to the president though, that isn't the case.

According to The Independent, Trump called Bannon “a very decent guy who feels very strongly about the country," but who has been getting "a bad rap" from the press. He also claimed that Bannon and Kushner were "getting along fine,” and though he admitted that "for a while it was a little testy, I guess for some of them," the president said the administration has "a lot of people that are getting along well," and that there was no cause for concern.

Of course, Trump's assessment of Bannon isn't likely to sway his critics very much. And although it's not clear how Bannon feels about having his whiteboards accidentally put on public display, it appears that, at least on social media, many Americans aren't particularly impressed with what they've seen.