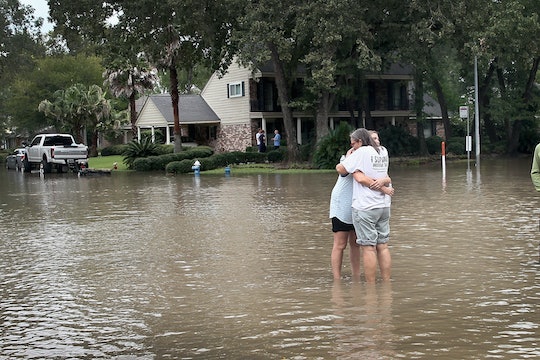 The images coming out of Houston and the surrounding areas affected by Hurricane Harvey have been tragic, but if you'd like your heart warmed rather than broken, look no further, because this photo of Texans forming a human chain to save a flood victim will remind you that despite all the awful things going on in the world, there are still good people out there. Always remember Fred Rogers' words: "When I was a boy and I would see scary things in the news, my mother would say to me, 'Look for the helpers. You will always find people who are helping.' To this day, especially in times of disaster, I remember my mother's words and I am always comforted by realizing that there are still so many helpers — so many caring people in this world."

It might be hard to believe, but he's right. According to Mashable, a group of good Samaritans discovered an elderly man trapped in a sinking vehicle in Houston, but nobody had any rope on them at the time. Witness Stephanie Edward Mata told Mashable that the victim was successfully rescued from the frigid water and delivered to a nearby police officer for further assistance.

And that's not the only example of "helpers," either. We shouldn't turn a blind eye to the devastation that Harvey has caused, but if you feel like you just can't take it anymore — maybe you're burned out on the news, maybe you're hormonal, or maybe you're just a big baby who cries over gum commercials like me — there are plenty of everyday heroes doing good works in the aftermath of the storm, and plenty of people sharing their stories.

If you've been sobbing into your pillow over the widely-shared image of those nursing home residents awaiting rescue while sitting in waist-deep water, you'll be happy to see that they're safe and dry now.

As are many other area seniors, thanks to people like these guys:

And these caring neighbors:

And these shining examples of "serve and protect."

Grandmas and grandpas not doing it for you? Let's turn up the cute:

These pups are all safe and sound.

More of a cat person? No problem.

And this may be a little blurry…

But if you have a moment, here's a short but glorious video of Bambi being returned to the wild, safe and sound (by men wearing camouflage, no less):

It's times like these that call to mind the words of Mark Vonnegut, as quoted by his father, Kurt: "We are here to help each other get through this thing, whatever it is." Keep up the good work, citizens of Texas.