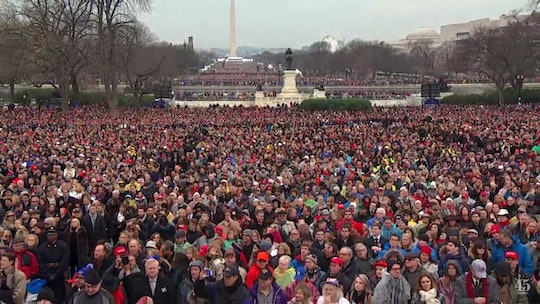 While Friday's presidential inauguration viewers already have a lot to focus on – President-elect Donald Trump, President Obama, former Secretary of State Hillary Clinton – it's also important to note the attendees. A photo of Trump's inauguration crowd mirrors his administration as a whole, one that's predominantly white and male. To be fair, there are some women and people of color in attendance (although some may well be protesters), but they're few and far between. President Obama drew a crowd estimated at 1.8 million people at his 2009 inauguration, and Trump was expected to host just a fraction of that number, which isn't surprising, considering he's the least popular president-elect of all time.

But even more notable than the size of the crowd is its makeup. The gaggle of white men in trucker caps is not at all representative of the American people; more than half of Americans are female, and more than one-third aren't white. During Trump's victory speech in the early hours of Nov. 9, he said, "I pledge to every citizen of our land that I will be president for all of Americans." In the months that followed, Trump's speeches, tweets, and cabinet appointments have caused many to fear that he won't keep that promise.

Protests erupted across the nation immediately following Trump's election, and as he takes office, they show no sign of stopping. Nearly 70 members of Congress refused to attend the inauguration, and Georgia Rep. John Lewis went on record saying that he doesn't consider Trump to be a legitimate president. Throughout the campaign, and up until the moment he took office, Trump has done little to inspire confidence in America's marginalized citizens, and it shows.

Since the election, those terrified by a Trump presidency have been urged to "give him a chance" before casting judgement about his ability to lead a unified country. He then nominated a cabinet that was overwhelmingly white and male (not to mention filthy rich and completely unqualified), and just recently, it was reported that he plans to cut many programs vital to America's citizens, particularly to people of color, women, and the poor. During his inaugural speech, Trump said, "We the citizens of America are now joined in a great national effort to rebuild our country and restore its promise for all of our people." His choice of phrasing – "our people" – is very telling. We all know who his people are, and who they aren't.