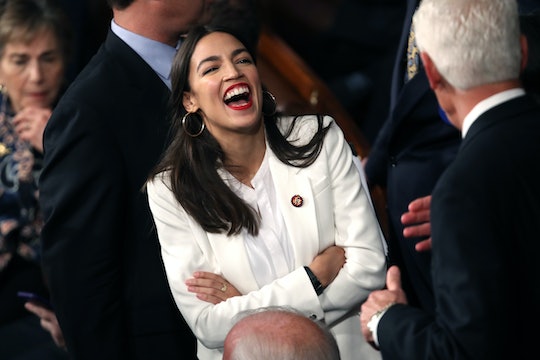 To say that this is an unprecedented chapter for United States government would be fair, as CNN reported last year that Congress has "never looked like this before." As The Washington Post reported, historically, women have never held more than 84 of the 435 seats in the House, but as of last year's midterms, women had been elected into 100 seats.

Among them were Ilhan Omar and Rashida Tlaib, who TIME reported are the first Muslim women to be elected to Congress. Alexandria Ocasio-Cortez became the youngest woman to ever be elected to a seat at 29 years old, Deb Haaland and Sharice Davids became the first Native American women elected, and Kristi Noem became South Dakota's first female governor.

To commemorate the moment, Vanity Fair photographed all of the "freshmen" congresswomen, saying the following on Instagram: "These six are the new face of the Democratic Party. At the link in bio, Vanity Fair takes stock of the evolving matrix of power within the Beltway and beyond, from rising stars to those whose clout springs eternal."

Many of the congresswomen themselves also commemorated the moment with a post to social media. "We’re in the building. Swearing in tomorrow," Alexandria Ocasio-Cortez said as she reposted the Vanity Fair photo, as well as an official image of her plaque, saying: "Transition time. It’s the little things that make it feel real. Everything for the Bronx and Queens. NY-14."

Ilhan Omar also posted a super sentimental image, on which her father penned the caption, as CNN reported. "Twenty three years ago, my family and I arrived at an airport in Washington DC. We were newly arrived refugees in this country, from a refugee camp in Kenya. I had heard about the promise of America, prosperity for all and hope for a better tomorrow," he wrote. "I could never have dreamed that twenty three years later I would return to the same airport with my daughter Ilhan by my side, the day before she is to be sworn in as the first Somali-American elected to the United States Congress."

Abby Finkenauer also posted a photo of her parents walking into her office, saying: "I call this one: 'A retired union pipefitter welder and retired public school secretary walk into their youngest daughter’s Congressional office' ... My first visitors."

CNN is calling today a "historic day in Congress," as the aforementioned women, as well as others like officially elected House Speaker Nancy Pelosi, all take their oaths. "We have no illusions that our work will be easy and that all of us in this chamber will always agree, but let each of us pledge that when we disagree, we respect each other and we respect the truth," Pelosi said, after being sworn in as Speaker of the House of Representatives.

Of course, these women are all walking into a terse situation, given that the government has been shut down for a second week now, CNN also reported, as President Donald Trump demands that funds be allocated for the building of a wall between Mexico and the United States.

Though it's hard to say what will transpire in the coming weeks and, ultimately, years, it can only offer us hope that so many more voices are being represented in the government.