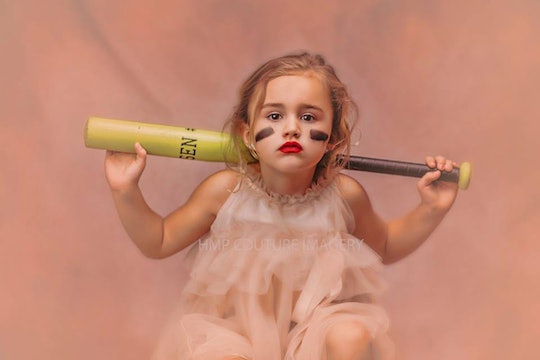 Photographer Heather Mitchell was inspired to photograph a series of girls dressed as athletes and princesses after a fellow mom made a remark about her 8-year-old daughter's interest in athletics, as TODAY Parents reported. Disturbed by the comment, Mitchell created the empowering project to reinforce the idea that girls can't and shouldn't be boxed in by gender stereotypes and how their looks are perceived by others.

Mitchell's quest to create the stunning photo series began at one of her daughter's softball practices, when a fellow parent made a perplexing judgment call about her child's "girly girl" personality. "One of the moms told me [my daughter] was not athletic — that she was a girly girl," Mitchell recalled, according to People. "I couldn't sleep that night. All I could think was, 'Why does she have to choose?'"

That's when Mitchell got the idea to bring her daughter, Paislee, to her photography studio for an impromptu photo shoot. To demonstrate that her daughter can have the best of both worlds, she dressed Paislee in a poofy princess dress and softball gear. Mitchell completed the look with a flower crown, a softball mitt, and cleats. It's absolute perfection.

After Mitchell posted the shot to her HMP Couture Photography page, other parents reached out to have their daughters participate in similar photo shoots.

What Mitchell ended up with was an breathtaking and important series about giving girls the confidence to be themselves.

All of the photos show the young ladies wearing dresses and athletic gear, whether it be a basketball or baseball mitt. Mitchell's subjects appear triumphant, confident, and above all else, authentic.

“I hope that every little girl that sees this series can see that there is no box," she told People about the project. "Whatever their dreams are, they can achieve them.”

The success of the series (the photos have gone viral) means a lot to Mitchell, who understands her daughter's plight all too well. "I played every sport my school offered and wore lipstick to every game," she told Scary Mommy.

On Wednesday, April 18, she shared a group shot to Facebook, captioning it: "BECAUSE YOU CAN DO IT ALL."

Admirers of Mitchell's work left countless comments on the photo, which shows the girls sitting upon a throne of softballs.

"Can I say from a mom with a daughter who was athletic in school and played basketball in college to joining the Army, this blesses me," one fan penned. "It's so hard for these girls to fit in, when they feel they either have to be Tom boys or girly girls. I love that you are showing them they can be both!"

Someone else chimed in, "This is awesome!!!!! Congrats on going viral! Such a positive message to all girls!!!"

"Love these!!" another person commented. "Showed these pics to my 6-year-old ball player and she’s like yeah let’s do this!"

The reactions to Mitchell's series are proof that more needs to be done to empower girls for exactly who they are, rather than who they're expected to be. Representation matters.

More Like This
Here Are Parents' Top Trending Searches In 2022, Because Google Really Is Our BFF
Viral Reddit Post Asks If A Toddler Can Watch Cartoons Without Headphones On A Plane
Over 10,000 Sippy Cups & Bottles For Toddlers Recalled Due To Lead Poisoning Hazard
Kim Kardashian Says She's "Shaken" By Balenciaga's Ad Campaign Featuring Children