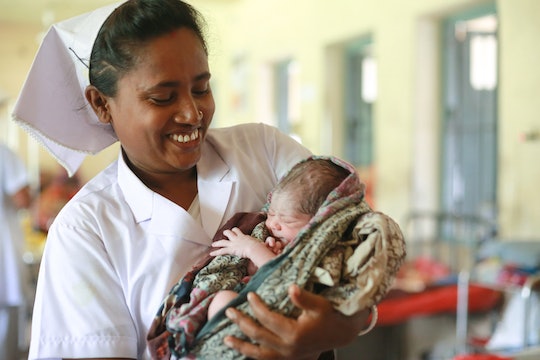 These Photos Of Midwives Working Around The World Are So Touching

Having a good midwife can mean the difference between a bearable birthing experience and down right hell. But in some parts of the world, a midwife can mean the difference between life and death for both mother and baby. This photo series shows the important work of midwives around the world and sheds some light on the ways in which they help keep mothers and babies safe, as well as the resources that they need to do so.

The series entitled "My Midwife" comes from the global nonprofit organization WaterAid and its Healthy Start campaign, which aims to better the health and nutrition of newborn babies and young children by ensuring that health care facilities around the world have access to clean water, plumbing, and good hygiene standards. The photos show new mothers, their babies, and the midwives who saw them through the earliest hours and days of a new life. Between medical care and emotional support, these midwives are providing essential services in the U.K., Malawi, Rwanda, Bangladesh, Canada, and Tanzania.

Lisa Schechtman, U.S. Director of Policy and Advocacy at WaterAid, spoke with the Huffington Post about the importance of midwives. She explained that no matter where the births take place, midwives are an important part of the process:

Whether a mother gives birth in a state-of-the-art hospital or a rural clinic without access to clean water, all births share the same joy and an appreciation for the help of midwives.

Of course, not all women have the same experience. While the American College of Nurse Midwives reports a relatively low number of midwife-attended births in the U.S. (less than 9 percent of all births in the country), they play a very important role in neonatal care around the world, particularly in developing countries. In many of the world's poorer nations, midwives save the lives of both women and children.

Roughly 350,000 women die while pregnant or giving birth every year, and up to 2 million newborns die within the first 24 hours of life, according to the United Nations Population Fund. With the help of trained midwives these numbers could be dramatically reduced, according to World Health Organization. Along with pregnancy, labor, and delivery, the UNPF states that midwives could provide 87 percent of all necessary sexual, reproductive, maternal, and newborn health services as well.

Unfortunately, only 42 percent of trained midwives work in the 73 countries that make up 90 percent of all maternal and newborn deaths, according to the UNPF. There are a number of factors holding back the profession and creating a midwife shortage, including inconsistent training, little recognition, low pay, and limited career opportunities, according to Pass Blue. Without proper training and motivation, midwives are unable to provide the needed care where it would help the most.

However, Schechtman told HuffPost that these aren't the only things hurting midwives across the globe:

Far too many midwives around the world lack the most basic means to keep patients safe. It is estimated that one in five babies who die in their first month in low- and middle-income countries could have survived if they had been washed in clean water and cared for in a clean environment by people who had washed their hands.

WaterAid believes that the lack of clean water and poor sanitation are contributing factors to high infant mortality rates. Schechtman explained to HuffPost that in 2013 alone, four babies died every five minutes in Sub-Saharan Africa or southern Asia due to high preventable conditions, such as sepsis, meningitis, or tetanus. WaterAid Global Head of Campaigns Savio Carvalho stated in a press release that WaterAid is looking to raise awareness of the issues and places in need:

Wherever you are in the world, clean water, decent toilets and good hygiene practice are essential for a healthy birth. The deaths of 767,000 newborns each year from infections is unacceptable, and it should make us angry, because the link between dirty conditions and neonatal deaths is something we have known how to address for more than 150 years.

Raising awareness of the important work that midwives do, as well as the great need that exists is the beginning of providing adequate care to women everywhere.

More Like This
New Report Shows 80% Of Pregnancy-Related Deaths Are Preventable
Chrissy Teigen & John Legend Are Back On The Red Carpet
What Does Amniotic Fluid Smell Like? A Nurse Explains
The 16 Best Affordable Maternity PJs & Lingerie Sets On Amazon