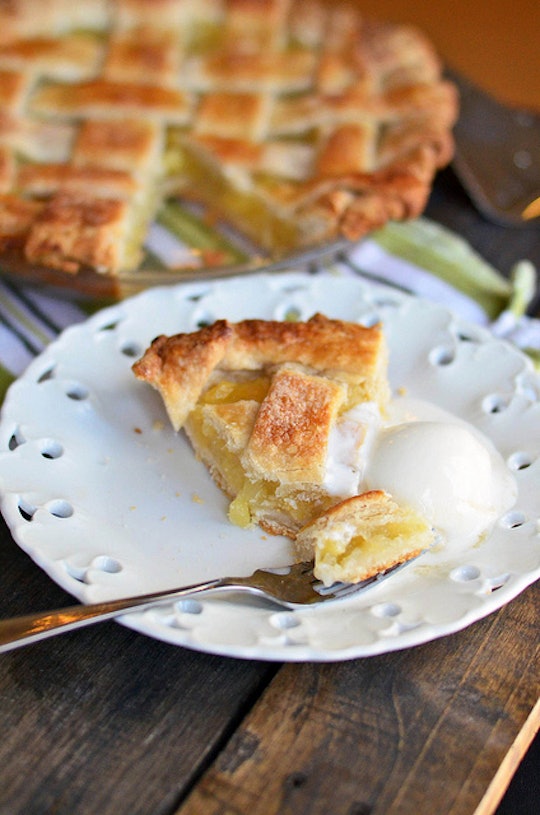 This Pie Just Might Help You Go Into Labor This Thanksgiving

If you'll have reached — or almost reached — your due date this Thanksgiving, anxiously awaiting your little one's arrival and sick and tired of being pregnant, you might start to look for festive, Thanksgiving-related ways to try to help move things along naturally. From walking to sex to spicy food, there are a lot of things out there that people swear by when trying to naturally induce labor. As it turns out, you may not need to look much farther than your dinner table for a pie that can help you go into labor this Thanksgiving or, at least, make your laboring process go a little bit smoother.

Whether it helps propel you into active labor or just makes the waiting more bearable, this pineapple pie from Fork Vs Spoon will satisfy some hungry, anxious expecting parents, so go ahead and indulge in a slice or two. First though, we must address the magic ingredient: pineapple. While some moms claim it was all the pineapple they ate once they were full-term that pushed them over the edge and made them go into labor, many health care providers, like those at OBGYN North, argue that pineapple "isn't supposed" to actually help induce labor, but instead helps ripen your cervix and make labor easier. According to Mom Junction, pineapple, especially fresh and recently-cut pineapple, contains a proteolytic enzyme called bromelain, which is what's responsible for its cervix ripening benefits. The article also claims that bromelain does help induce labor and, similar to the idea around other types of labor-inducing foods, claims that eating a large amount of pineapple also affects the stomach, which then causes uterine contractions.

Eating a lot of pineapple likely won't hurt you, but you still might not want to get your hopes up too high in case it doesn't quite work out the way you'd planned, since there aren't any real guarantees that any foods (or anything, really, other than time) will help coax your precious little bundle into the world any sooner than they were already planning on taking.

Now let's get to the fun part: the pie. Didn't know that you could make pie out of pineapple? Fork Vs Spoon blogger Mallory Rakay wrote in the post accompanying the recipe that when telling other people about how much she loved growing up eating pineapple pie, she found that many other people had never heard of it either. Rather than cooking the pineapple down into more of a sauce or jam, or using it to flavor a custard or curd, this recipe uses the fruit itself. The original recipe calls for canned crushed pineapple, and since the aforementioned Mom Junction article suggests that the canning process renders the bromelain in the pineapple ineffective (which probably isn't really what you want if you're looking to try to induce labor), we suggest using some canned and some fresh pineapple, or all fresh fruit. The result may not be the same as the original, but we're betting it's going to be just as delicious. That being said, it doesn't seem as though there's been a ton of research into pineapple and labor induction, so you could just hedge your bets, and if it just so happens to do what you're hoping it will, you might not care so much.

Make it as written for an excitingly unique — and delicious — fruit pie for your family's holiday table. Or, decide that pineapple pie is a reward in and of itself and go with the canned fruit. You never know, labor might be right around the corner anyway, and either way, there will be plenty of pie.