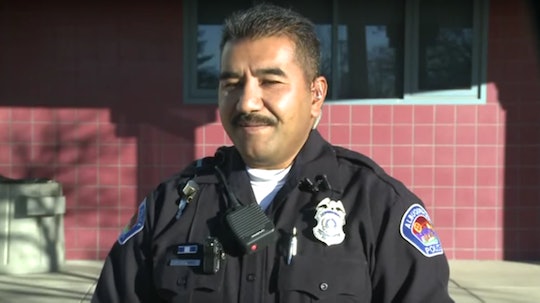 As the election nears and the country looks increasingly torn apart, it's nice to take a step back and hear about some strangers being kind to one another. So, ready for a story that will make you believe humanity is fundamentally good? This police officer helped a family get their daughter to a life-saving surgery. No, you're crying.

Back in 2012, an Albuquerque family got a terrible call right before Christmas. Their 2-year-old daughter needed life-saving heart surgery in Denver, right away. Insurance would cover costs for the mother and the daughter to get to Colorado, but not for the father, meaning he'd have to stay home. He wouldn't be able to support his wife and daughter, and he wouldn't be there if the worst happened — an unthinkable option for him. So the family took to the streets in 35-degree weather to panhandle, in the hopes that they'd be able to scrape up enough money for his transportation.

However, Arizona law has a long history of trying to crack down on panhandlers, and an observer called the cops to report the family. (Right now you're probably thinking, "This isn't a nice story! Everything is terrible in the world after all!" Wait for it.)

Hernandez talked to the family, and was moved by their story. He told Albuquerque news station KRQE that he had gone through something similar a few years prior, when his young son was diagnosed with epilepsy. "I experienced it firsthand with one of my children, and my fellow officers stepped up to help out in my time of need, so it was just my chance to give back."

So Hernandez promptly asked the father to get into his car, not because he was in trouble, but because he wanted to give him a ride to the bus depot. And at the depot, he bought him a ticket to Denver. As he told KRQE, he let the parents know that "the only thing I ask of you guys is that you call me back after the surgery and let me know how everything went."

"He'll have a special place in mine and my family's heart forever," the father in question told the news station. (The family asked not to be identified, as they wanted Hernandez to receive all the attention.)

So the next time you begin to feel that our country is hopelessly divided, remember Luis Hernandez, and try to be like him.