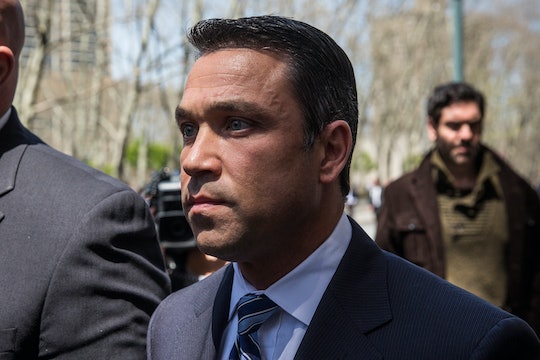 People on both sides of the political spectrum are horrified by the Trump administration's policy of separating immigrant children from their parents — people with empathy, that is. I've yet to see one good argument for why toddlers seeking refuge should be treated worse than felons, but now I can officially say I've seen the worst one: this politician compared the cries of children cruelly separated at the border to kids of working moms, according to Working Mother. Hey, if you're going to defend the heartless, inhumane treatment of innocent children, why not offend more than half of the mothers in America, while you're at it?

Speaking in regards to audio recordings of wailing children in Texas detention centers, former Congressman Michael Grimm told NY1, "As a mother leaves to go to work and has to leave her child at daycare, you're going to hear those same exact things, OK?" Shockingly, Grimm received a smattering of applause from the women surrounding him when he made the comment. I don't know if they're mothers, let alone working ones, but Grimm is single and childless, so it's unclear why he'd be hanging around day care centers listening to the cries of children. A rep for Grimm did not immediately respond to Romper's request for comment.

It's also unlikely that Grimm will ever be able to gain firsthand experience at a day care, as he's a convicted felon. Grimm was charged with 20 counts of fraud, tax evasion, and perjury in 2014, according to the New York Times, and although he eventually pleaded guilty to only a single charge of felony tax fraud, he also signed a statement of facts admitting to committing perjury, wire fraud, and — get this — hiring undocumented immigrants at his New York restaurant, Healthalicious. Grimm espoused staunchly conservative immigration policies during his first congressional campaign, while he was still employing undocumented workers. A web archive of his original campaign website details his stance:

This nation has had enough of career politicians who want to reward illegal aliens with amnesty and citizenship for breaking our laws. Most countries, including Mexico, our neighbor to the south, have zero tolerance for illegal immigration, and its time we did the same. As far as I am concerned, stopping illegal immigration is as much about protecting American lives as it is about protecting American jobs and maintaining a stable, healthy economy.

If illegal aliens can’t work here or collect government benefits, they will not continue to come here, or want to remain here. With that in mind, as Congressman, I will seek the adoption of penalties, and enforcement of those penalties, that will absolutely deter employers from breaking our immigration rules.

So... no hiring undocumented workers, unless it's to make food with names like "Hard Core" and "Get Ripped." And as for their kids, "the conditions that they have are much better than where they came from," Grimm argued in the NY1 video. Those conditions, if you've been avoiding the news, include sleeping in cages under a mylar sheet, surviving on a steady diet of bottled water and potato chips, and changing each other's diapers, because there are no parents there to do it, according to The Cut. It's hard to imagine a situation worse than that, but even if that's true in come cases, our goal for these kids' care shouldn't be "slightly less horrible than the place they fled from."

And as for the disgusting parallel Grimm drew between women who need to earn money to feed their kids versus armed federal agents who literally rip babies off of their mothers' breasts, I cordially invite him to take a damn seat. According to the American Academy of Pediatrics, "High-quality early education and child care for young children improves physical and cognitive outcomes for the children and can result in enhanced school readiness." And here's what they have to say about separating and detaining immigrant children:

In accordance with internationally accepted rights of the child, immigrant and refugee children should be treated with dignity and respect and should not be exposed to conditions that may harm or traumatize them. The Department of Homeland Security facilities do not meet the basic standards for the care of children in residential settings.

Keep your heads up, working moms. You're doing what's best for your kids, and this dude has no clue what he's talking about.