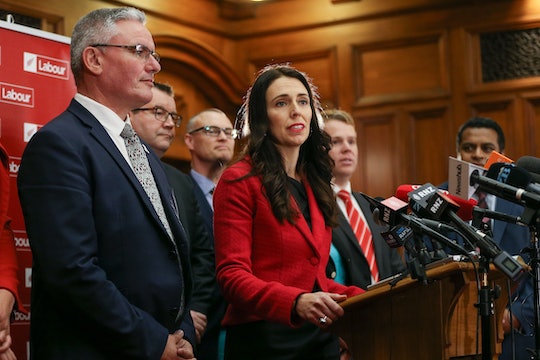 Hey, Men Who Think Being Pregnant Means Women Can't Do Their Jobs—Read This

On Tuesday, 37-year-old politician Jacinda Ardern became the new leader of New Zealand's Labour party after a vote by the party, making her the youngest party leader ever — and the second woman to have ever held the job, according to The Guardian. But only hours into her new role, this newly-elected official was asked about her baby plans in multiple interviews, and many have viewed it as the perfect example of the unfair double standards that women continue to face in the workplace.

As the opposition party's new leader, Ardern will certainly have her work cut out for her: according to The Guardian, she took the role only two months ahead of the country's upcoming general election, following the previous leader's resignation amid low poll numbers and a major lack of public support. Ardern — who was first elected to parliament in 2008 — is popular among voters, and in a press conference following the announcement of her leadership, she promised her campaign would be one of “relentless positivity.” But while she's been basically been tasked with completely reinvigorating support for her party in only two months, it seems some were far more interested in the state of her womb. In two separate TV interviews, Ardern was asked about whether she'll be having babies in office, and honestly, it was totally ridiculous.

The first inquiry into Ardern's views on motherhood was posed Tuesday night, according to BBC News, during an appearance on New Zealand's The Project. Asked by host Jesse Mulligan whether she felt she'd had to choose between her political career and having a family — a question rarely, if ever, posed to men — Ardern handled the question diplomatically, explaining that her situation was no different than what many women face. She said,

I have no problem with you asking me that question because I have been very open about discussing that dilemma [in the past] because I think probably lots of women face it ... My position is no different to the women who works three jobs, or who might be in a position where they're juggling lots of responsibilities. You've just got to take every day as it comes and try and see if you can make the best of the lot you're given.

While Ardern likely hoped that reporters would then move on to actually-relevant questions about her leadership and plans for her campaign, the next morning, she was asked the question again — and she was clearly not impressed. During an appearance on The AM Show, co-host Mark Richardson asked Ardern if she thought it was "OK for a [Prime Minister] to take maternity leave while in office," arguing that employers "need to know that type of thing from the [women they] are employing."

In addition to being completely untrue — New Zealand's Human Rights Acts specifically protects women from being discriminated against for being pregnant, and employers are not allowed to ask if they are pregnant, or if they plan on getting pregnant in the future — it's also straight up inappropriate. But thankfully, Ardern wasted zero time putting Richardson in his place.

According to The Guardian, Ardern acknowledged that the fact that because she'd discussed it in the past, it may have made it seem like a fair question to ask. But she then turned to literally point her finger at Richardson. She said:

For me, no, [the question is not inappropriate], because I opened myself up to it. But, you. For other women, it is totally unacceptable in 2017 to say that women should have to answer that question in the workplace, it is unacceptable, it is unacceptable. ... It is a women’s decision about when they choose to have children and it should not predetermine whether or not they are given a job or have job opportunities.

Ardern has received lots of support for her response, with many on social media criticizing not only the hosts' questions, but the fact that asking them in the first place is representative of the bigger issue of tying motherhood to women's identities in a way that men never have to face. Male politicians' family responsibilities are rarely even questioned, after all, let alone used a reason to cast doubt on their ability to do their jobs properly.

It also perfectly illustrates why the motherhood penalty continues to affect women in the workplace the way it does. Being a mother can have a big impact on women's career success: according to The New York Times, women's earnings generally tend to decrease, on average, by about 4 percent for each child they have, and if a woman with children is hired for a new job, she is likely to be offered about $13,000 less on average than a man who also has kids. Women with children are also more likely to be held "to harsher performance standards" by their bosses, and according to Fortune, mothers are more likely to be seen as having "lower competence and commitment," and are less likely to be hired and promoted.

But it's not just women with children who are affected. Like Ardern being questioned about whether she could really run the country and possibly one day also have a baby (since when did those two things become mutually exclusive?), studies have found that even childless women are held back by the "motherhood penalty" if they are of child-bearing age, according to New York Magazine. After all, even though their performance may not currently be affected by family responsibilities, the implicit assumption is that they could eventually have children and become less dedicated to their work, or that they could leave all together in favor of full-time caregiving.

The questions about Ardern's motherhood plans are particularly infuriating, given that she's actually a well-liked and experienced politician, and many New Zealand voters seem hopeful that she could bring much-needed positive change to the party. According to The New Zealand Herald, 43 percent of people polled by the paper said they would be more likely to vote Labour now that Ardern is leading the party, while on Facebook, 65 percent expressed their support.

Hopefully, Ardern's total shut down of Richardson's question will be a lesson to anyone else considering asking her about her baby plans instead of her actual job, and that it'll be the last she hears on the topic. But the fact that she even had to take such a stand in the first place is a clear sign that there is so much work that still needs to be done when it comes to gender equity in the workplace, and that women absolutely need to continue fighting for their rights.