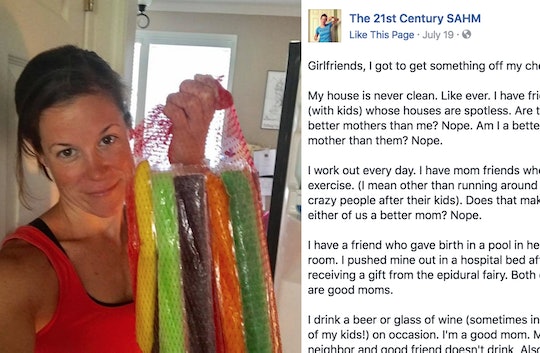 Courtesy of The 21st Century SAHM

The one thing people don't prepare you for during pregnancy is how often you will be judged and criticized as a parent. You know parent-shaming is a thing, but you don't understand the actual extent to which it happens until you're in the thick of it. Everything from what you feed your child to what you're wearing that day are open to snide remarks. It's ridiculous, which is why this mom's post about mom-shaming is the reality check you need.

According to Scary Mommy, writer Karen Johnson, who runs The 21st Century SAHM, posted an epic missive to Facebook on Wednesday that drops the mic on mom-shamers. Johnson, a mom of three kids, starts her post with, "Girlfriend, I got to get something off of my chest," then goes down the list of all the unfair ways parents are shamed. For example, she writes in her post,

I'm a yeller. I have a good friend who is quiet and extremely patient. I envy her. But we are both good moms. I have friends who are super organic, chemical free, and dye free. My kids sometimes eat popsicles for breakfast. The cheap kind that are 50 for $2.00. Are either of us better than the other? Nope.

I often feel bad for the choices I make as a parent. Right now, my son is watching an episode of Paw Patrol as I work in my office. I hear him laughing a few feet away — the most beautiful, innocent laugh. Yet, I'm sure there are parents out there who would gladly tell me how I'm rotting my kid's brain. Then there's that one time an older woman chastised me for having my son in a restaurant at 8 p.m. And sometimes, the shaming isn't direct; when another mom asked me about my son's progress, she responded with, "Oh, well, my son's just advanced, so you know, it's not a big deal."

Not only does mom-shaming stigmatize parental choices, it can also have adverse effects on a parent's mental health. According to Marie Claire, moms who criticize others can cause anxiety and pain in the person they're judging and shaming. And a study released by the University of Michigan in June found that people who mom-shame — whether it's a friend, family member, another parent, or an online troll — cause "maternal anxiety." According to researchers, about 47 percent of moms who responded to the survey said they felt unsure of themselves and their parenting skills.

Johnson told Romper that she wrote the post because,

I am tired of the haters and judgmental sanctimommies. Parenthood is hard and often we are already full of self-doubt. We work so hard yet we face criticism if we do something different from someone else. It doesn't make me a better or worse mom if I choose to parent differently than someone else. It just makes me a mom choosing what's best for my family. I wrote it to say that maybe parenthood would be easier for all of us if we were supportive and gave each other some grace.

The mom of three crafted one hell of a powerful post. And the response has been "overwhelmingly positive," she told Romper. As of Thursday morning, the Facebook screed received more than 500,000 likes and over 340,000 shares. Johnson added that she hopes her message continues to spread and that,

I hope parents continue to think before they judge and criticize another parent and instead opt for "Hey, good job!" because that would be awesome wouldn't it?

Johnson hit the nail on the head. There's no reason why parents can't give each other support. And this doesn't only go for people who identify as moms; this goes for dads too. As parents, we need to support each because, as Johnson writes in her original post, "Raising kids can knock the wind out of a person."