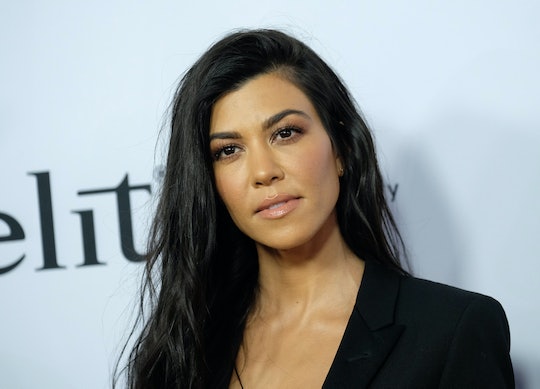 It seems like there may be another Kardashian Jr. on the way. A report released Wednesday afternoon says Kourtney Kardashian is pregnant, and let's just say Twitter is not here for it. According to Life & Style, the oldest Kardashian sister is reportedly carrying her fourth child, and first with boyfriend Younes Bendjima. Life & Style claims it learned about the news exclusively from a source who said Kardashian, mom to three children with ex-partner Scott Disick, was "thrilled to learn she was expecting." The source added,

She loves being part of a large family and having so many siblings, and she wants the same for Penelope, Mason, and Reign.

There is no proof to this claim, and Romper has reached out to Kardashian’s representatives about the reports. Kardashian has not confirmed or addressed the rumors on social media platforms, either.

The news of Kourtney Kardashian's alleged pregnancy comes on the heels of rumors that younger sisters Khloe Kardashian and Kylie Jenner are also expecting children. Neither sister has confirmed or addressed speculation about their reported pregnancies.

Although Keeping Up With The Kardashian fans are eager for the juicy details, this latest so-called pregnancy reveal has most people on social media skeptical. In other words: They're not buying it.

It's safe to say that, when it comes to pregnancy rumors, the last few weeks have been a whirlwind for the KUWTK clan. But Kim Kardashian is the only one to confirm on social media that she is expecting her third child via surrogate with husband Kayne West, according to Refinery29.

It's no surprise, though, that pregnancy rumors involving Kardashian would surface at this time. After all, in the first episode of this season's Keeping Up With The Kardashians, the oldest sister said she would consider having a fourth child with Disick "if the situation was right," according to In Touch Weekly. The premiere aired nearly two weeks ago, on Oct. 1.

That's not to say that Kardashian might be expecting another child — this time with Bendjima, the 24-year-old former boxer and model she has been dating for a year. Instead, it's this short amount of time between the KUWTK premiere and the pregnancy rumor that makes me far more suspicious of Life & Style's source.

The source, by the way, has no love for Disick, who has shown a pattern of irresponsible and destructive behavior throughout the 10 years KUWTK has been on the air. They told Life & Style, that Kardashian:

...needs a man who will be both present and sober. With his charming personality and intelligence, Younges will make the perfect father.

Although Kourtney Kardashian hasn't addressed the baby bump speculation directly, she did post some easygoing Snapshots hours after the news broke. In one photo, Kardashian is showing off a pair of super sexy leather pants; in another post, she shares a photo of a shirt with a screen print of a sweet message that reads "To the moon and back."

Of course, fans of the Kardashian-Jenner clan shouldn't hold their breath waiting for any of the Kardashians to address the pregnancy rumors anytime soon. The celebrity family is notoriously tight-lipped about personal details, so you should expect them to reveal important news — whether it's about a pregnancy or break-up — in their own way, on their own time, or in their TV show.

And as it should be. Of course, when you're a celebrity family, gabbing sources and rumors come with the territory. But that doesn't mean the Kardashians shouldn't be in control of what they reveal to the public. If any of the Kardashian sisters are pregnant, wonderful. But it's not for a source to tell the public that.