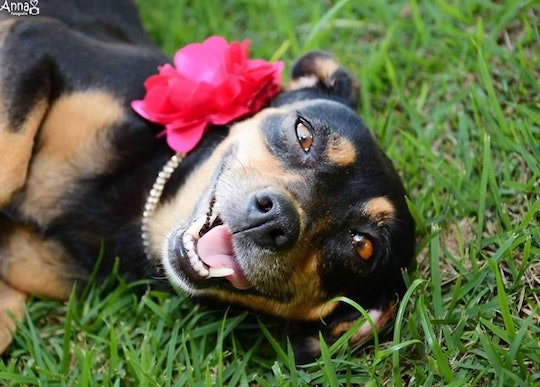 Don't you just love maternity photoshoots? It's so nice seeing pictures of your friends and friends of friends (because Facebook stalking is so much fun) documenting such a momentous and joyous occasion in their lives. Maternity photoshoots are super current and cute for expectant mothers to be. But who says maternity photoshoots have to just be for humans? Why can't they be, say, for pregnant dogs? Or any expecting pet for that matter? That is what one proud pet owner decided to do. This pregnant dog's maternity photoshoot is going viral very quickly and for a good reason: it's one of the best things you'll see on the Internet all year.

The dog, whose name is Lilica, was photographed by Brazilian photographer Anna Paula Grillo after Lilica's owner approached the photographer to do a maternity photo shoot. Lilica was pregnant with five puppies at the time. Soooooo cute, right?

In an interview with The Dodo, Grillo told the website that the pooch had struck up a romance with a neighbor's dog and found out they were expecting soon after. Lilica's owners approached Grillo to preserve this fond period in Lilica's lifetime. Sounds exactly like your pregnant best friend, right? Look at the following photos and see how beautiful and true to life the shoot really is:

Lilica looks like she is just basking in her pregnant glow, right? It looks like modeling just comes so naturally to her, too. Like in the next picture, below.

Look at the sheer joy in the pooch's eyes. Doesn't she look like a beautiful, elated expectant mother? The dog knows how to pose, too. Check it out in this photo:

Awwwwwww. Seriously, so sweet and so funny.

Grillo said in the same interview that since the photos were taken, Lilica went on to give birth to five puppies, all of which were adopted by the owner's children and their families.

Grillo told website The Bored Panda that the photo shoot only lasted 20 minutes, but was still so much fun. "It was amazing," she said. "I felt like I understood her completely!"

While some people have a hard time being natural model, it looks like it comes completely natural to Lilica. The way she smiles, poses, and enjoys herself all around is fantastic.