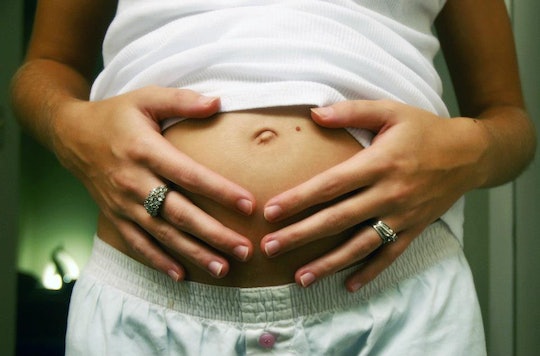 This Pregnant Fitness Model Shut Down Her Critics In A Great Way, Because All Bodies Really Are Different

When it comes to pregnancy, people have lots of opinions — and they often feel the need to share them, whether or not anyone asks. One person who knows this all too well is Australian fitness model Chontal Duncan. Duncan is a devotee of High-Intensity Interval Training (HITT), and when she found out she was pregnant, she decided to not let her pregnancy interfere with her fitness regimen. But even though it’s completely nobody’s business but Duncan’s and her doctor’s, according to Us Weekly, seeing photos of Duncan’s crazy-fit pregnant body on Instagram has caused the Internet to freak the hell out. But with absolutely zero apology, this pregnant fitness model shut down her critics in a great way, by reminding them they, hey, bodies are different, remember? (And also, you know, it's no one's business.)

While it’s clear that Duncan’s bod has a lot to do with the fact that she is super athletic and works really hard, it also has a lot to do with just basic genetics: she’s 6 foot 1, with a long torso, and that alone makes a big difference in what her pregnancy body is going to look like (compared to someone like me, who is a whole foot shorter, and who carried twins — there was no way my bump wasn’t going to be gigantic, even if I only ate kale and ran marathons on the regular). It’s also Duncan’s first pregnancy, and it takes longer for your body to “show” the first time than it does for subsequent pregnancies. But to drive that point home, Duncan posted a pic of herself with her friend Nat, who was only about four weeks further along than Duncan, but who is shorter, and also on her third pregnancy:

According to the Daily Mail, Malcolm Dixon, a UK-based obstetrician and gynaecologist says a small bump doesn’t mean much, particularly in athletic women:

If it’s a first baby, the tummy muscles tend to be taut and strong, so the baby is held in tightly. This is especially true of women who are [fit]...If you’ve already got a bit of fat around the stomach, a small baby bump might appear larger, whereas if you’re slim there’s nothing to show except the baby. It makes no difference to how big the baby will be when it arrives — it’s just how it looks.

Dixon also noted that the position of the baby can affect the size of the mother's belly:

Far from being a problem, the truth is that Duncan’s athleticism will probably work to her advantage when it comes to labor and delivery (and post-delivery recovery too). According to ABC News medical contributor and OB/GYN Dr. Jennifer Ashton,

Pregnancy is an incredible physical feat and labor and delivery are athletic events so training for them isn’t such a bad idea. Having stamina, strength and muscle tone are good for both mom and baby.

As pretty much anyone who has ever been pregnant knows, to a certain extent, your body is just going to do what it does. Of course, eating as healthy as possible and being reasonably active is important, but even that is often out of a lot of women’s control (see: crazy morning sickness that keeps people from keeping food down or even gaining weight, or complications that keep them bed-ridden or that make exercise contraindicated). In Duncan’s case, she not only seems to be feeling well and having a complication-free pregnancy, but she also had a serious background of fitness training prior to getting pregnant. There's no reason why continuing is a bad idea.

But as much as nobody should be judging Duncan at all for her decisions, pregnant women shouldn't have to feel bad if they aren’t a 6-ft-1 fitness models with six-pack baby bumps. The reality is that, just as people like to shame women like Duncan for being too fit/skinny/whatever when pregnant, women who gain “too much” weight, or who don’t eat perfectly, who get epidurals, who don’t get epidurals, who have C-sections, who have at-home water births, etc. etc., get criticized too.

The point, more than anything, is — once again — every woman’s body is different. They look different, and respond to pregnancy in all sorts of different ways. Unless an actual medical professional in charge of that woman’s care has come out and voiced an actual medical concern (and not an outdated fat-shaming or whatever-shaming concern, doctors!), then there is really no reason to be anything but happy for her. At the end of the day, whatever keeps mom and baby healthy and safe, the better.