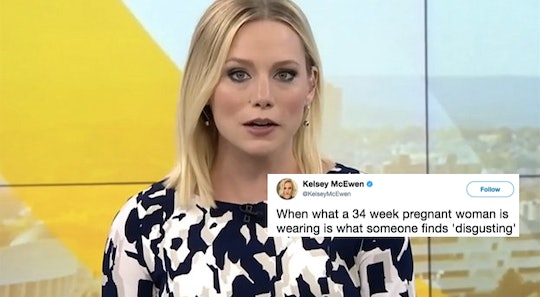 There are a lot of changes involved in pregnancy, not least of which is the growing size of an expectant mama's belly. While the "bump" is often seen as a badge of honor, there are still some people who think it should be hidden. And a perfect example of this population surfaced after this pregnant meteorologist had to address body shamers who criticized her maternity clothes and called them "disgusting." To be clear: No pregnant woman should feel pressured to hide her growing baby and this mom made sure the world is fully aware of this.

Kelsey McEwan is a meteorologist in Canada who has recently been driven to report on more than just the weather. After becoming the target of some serious body-shaming, McEwan took on the depressingly prevalent topic and schooled one of her critics with what is being hailed as an eloquent response to the hate.

McEwan is currently 34 weeks along in her pregnancy and has yet to begin her maternity leave from Your Morning, the news show that she calls home. On Aug. 15, the show's official Twitter account received a notification from an unidentified viewer who felt compelled to comment on McEwan's maternity work wardrobe. The meteorologist took a screen shot of the tweet that said, "I can't believe the skin tight maternity attire ... disgusting!" She then crafted a response in the form of a tweet on her own page.

On the following morning's edition of the show, McEwan addressed the tweet. According to a clip of the segment, she said:

Your body is not for anyone to talk about, whether they're talking about your pregnant shape, or they're talking about your athleticism, or your hair color, or your skin color, it is not anyone else's business but your own. When all we can talk about is our worth based on attractiveness [...] we just set ourselves up to fail time and time again [...] We are so much more than how we look.

Along with addressing the recent negativity, McEwan also stated that she has received a lot of support from viewers during her pregnancy as well and thanked them for it. Her comments on the show have received praise from fans and viewers of the show, leading to another statement made by McEwan over her Instagram page. She wrote:

This is bigger than pregnancy. This comes down to how we fundamentally rank (and treat) people based on how they look.

Unfortunately, McEwan is not alone in her struggle. Numerous news anchors, meteorologists, and other public figures have been the target of body-shaming and sexist comments from viewers. This past June, for instance, another meteorologist in Mississippi had to speak out about a viewer criticizing her postpartum weight via email. In

Indeed, this is not the first time that meteorologists have been attacked for their appearance, In recent months alone, one was criticized over her hair and clothing choices while another was even pressured to put on a cardigan during a live broadcast because of public outrage over a sleeveless dress.

I'm not sure whether these negative voices expect pregnant women to return to the days of wearing corsets while pregnant and hide a growing belly at all costs, but McEwan's speech has inspired people in both Canada and the United States to resist such pressures. One such commenter said on McEwan's Instagram post:

What you said today about self-worth [...] what I teach my two daughters daily. I honestly believe that beauty comes from within. Thank you for standing up for that very fact today on live TV.

In later tweets, McEwan expanded on her rebuttal to the viewer and explained just how inappropriate it is to body shame a pregnant woman:

And while yes, many aspects of pregnancy can be "disgusting" (hemorroids, peeing accidentally, gas & heartburn), my growing belly is NOT.

As disturbing as it is to hear about stories such as McEwan's, her response brings necessary awareness to the issue and definitely inspires other victims of this type of abuse to speak out against it.