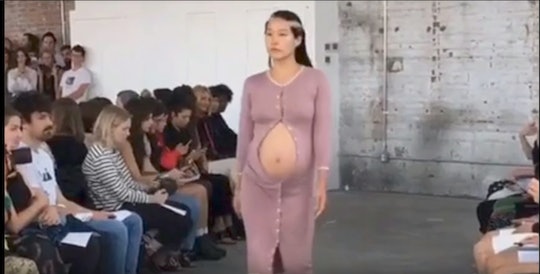 This Pregnant Model Perfectly Showcased Her Bump At NYFW

Pregnant women are told their growing bumps are beautiful time and time again, but rarely do they see this message reflected in the fashion industry. Sure, maternity catalogs feature pregnant models — but a bump has never been the trendiest accessory or considered to be high fashion, until now. Things changed recently when fashion aficionados watched this pregnant model walk in New York Fashion Week with her bump taking center stage. And, of course, it's an inspiring sight to see.

New York Fashion Week happens twice a year, when models and designers come together to show off some amazing works of art and make you so jealous that you can't sit front row to watch. What started as a way for designers to showcase their work in New York City during World War II, according to TIME, has since become one of the most highly anticipated events that happens twice a year. New York Fashion Week is a way to see trends and fashion forecasts for the upcoming season, according to Teen Vogue, which is why designers show their collections for the spring in the fall.

This upcoming spring, the hottest trend could very well be a pregnancy bump. No, really. During the fashion show for the brand Eckhaus Latta, one model walked in a mauve colored dress that perfectly put her bump on display. The photos and videos taken from the fashion show, that happened over the weekend, are all kinds of beautiful.

The model, Maia Ruth Lee, is 8 months pregnant, according to Vogue but that didn't stop her from strutting her stuff and looking amazing during the fashion show held in Brooklyn this past weekend.

Co-founder of the brand, Zoe Latta, told Vogue about the decision to cast Lee: "To have a bunch of one gender that's the same race and height and size and fit, wearing similar clothes and makeup — I don't think we're interested in that," Latta said. And Lee was certainly appreciative of this view, telling Vogue, "It's always about inclusion. I appreciate that."

But Lee isn't just a bad ass pregnant model, she's a New York City based artist who was raised in Nepal by parents who were Korean missionaries, according to The Cut. In addition to showcasing her work in galleries all across New York City, Lee is also the director of Wide Rainbow, a "non-profit after-school arts program" based in New York City for girls in middle school and high school, connecting them to art.

Sounds amazing. If you're interested in keeping up with this super cool woman, her Instagram account showcases her work and documents her pregnancy at the same time and is worth following.

In 2015 during Milan Fashion Week, Dolce and Gabbana titled their fashion show "Viva la Mamma" and sent models (and their kids) down the runway, according to Fit Pregnancy. Among those models was Bianca Balti, who was 6 months pregnant at the time, according to Entertainment Tonight, and glamorously showed off her bump in a blush colored dress.

And during the 2016 Victoria's Secret Fashion Show, model Irina Shayk was pregnant while she modeled some beautiful lingerie. Just four months later, Shayk gave birth to a daughter named Lea with boyfriend Bradley Cooper. But she wasn't the only one — according to Glamour, three other models have walked in the Victoria's Secret Fashion Show while pregnant and this shouldn't go ignored. With millions of people tuning in to this fashion show each year, the visibility these pregnant models have is awesome, and needs to become more prevalent in the fashion industry.

This type of inclusivity shows pregnant women that they, along with their bumps are beautiful and there needs to be more of that. And really, never has a bump been more in style.