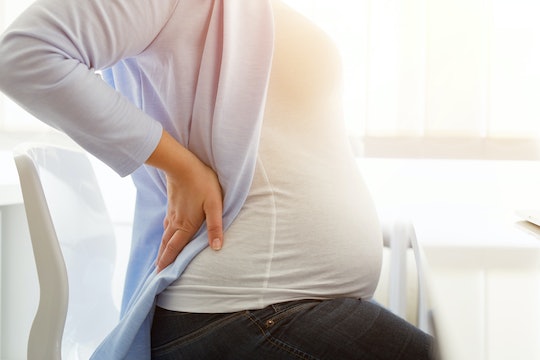 This Pregnant Mom Served Her Baby An Eviction Notice, & Overdue Moms Will Totally Get It

Towards the end of pregnancy, it might seem like there's no end in sight. Sometimes mothers-to-be turn to old wives tales, or internet tips, or advice from their fellow mom friends or family members to figure out a way to induce labor and get the whole thing over with. But one pregnant woman in Oregon decided to (jokingly) take legal action against her baby instead. This particular pregnant mom gave her baby an eviction notice, and it actually worked.

Kaylee Bays of Utah was pregnant with her third child, a girl, and was more than ready to give birth to her. But the little one wasn't cooperating, according to The New York Post. Bays thought she was going into labor at one point, but it stopped. She began experiencing contractions two weeks before her due date, and "thought for sure it was baby time," she told The Deseret News. And when the contractions stopped, poor Bays had to go back to work and wait it out. Bays told The Deseret News:

I was bummed all out. Finally I got fed up and said, ‘You know what, I'm going to sign an eviction notice for this little girl.'

Bays is a judicial assistant, and the whole thing was meant to be a joke. But the funniest thing is, the humorous plan was kind of a success.

The court order demanded that the baby be born within three days, The Miami Herald reported. A Facebook post from American Fork Hospital, where the baby was born, showed that the notice read "You have committed a nuisance because: Mommy is uncomfortable and running out of room for you! Too much heartburn and rib kicking, and I’m sick of waddling!!!” That's definitely something a lot of moms who are reaching the end of their pregnancies can relate to.

Amusingly, the tenant’s address was listed as Mommy Belly Lane in Womb, Utah, according to The Miami Herald. But even with silly additions such as that, Judge Lynn Davis signed the court order, The Deseret News reported. And less than 12 hours later, baby Gretsel was born.

Bays said Davis told her it was his first baby eviction notice in all his 31 years as a judge, according to The New York Post. Of course such a thing wouldn't be a regular occurrence, since it's not something you can actually legally control. But I'm a little surprised no mom thought of this before now — at least, if they have, it hasn't gone viral the way Bays' story has.

You shouldn't knock it until you try it, I guess, and even though Bays and Davis tried this method as a joke, it technically worked. Maybe baby Gretsel didn't want to be in legal trouble before she was even born? Who knows. Bays joked in the American Fork Hospital post, saying:

She didn’t want to be in contempt of court.

Bays said of Gretsel, according to The New York Post:

So far, she’s a good listener.

Although, I would argue she's not that good of a listener if it took a court order to get her to listen to her mom's wishes. But as long as it worked, Bays likely doesn't care what it was that made her daughter finally decide to make her debut into the world.

A lot of moms will go to all sorts of lengths to encourage their babies to be born by the time their due date rolls around. There are a ton of articles and message board posts online about how to induce labor. The tips include everything from taking a walk, to having sex, to eating spicy foods, and even medicinal or "mechanical" methods as administered by a medical provider.

But maybe a court order will be the next internet tip for expectant moms. As she quickly learned, you can't really know if it'll work unless you give it a shot.