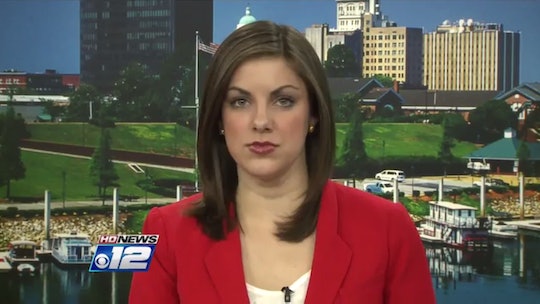 Pregnant Anchor Shuts Down Viewer Who Called Her "Disgusting"

It might seem like fake news, but it’s sadly the real deal. Indeed, a viewer reportedly called a pregnant news anchor “disgusting” because her maternity wardrobe was too form-fitting for live television. The body-shaming comments came from another woman in the form of a voicemail last week. But instead of just brushing off the infuriating rant, Laura Warren — an evening news anchor and investigative reporter for News 12 and NBC 26 in Augusta, Georgia — had the best response.

Last week, Warren, who is 20 weeks pregnant, took to her blog — Bump, Baby, and Breaking News — to respond to this viewer’s incredibly rude voicemail. “Yesterday, was a bad work day. I checked my voicemail (hoping it was a great story tip...) No such luck,” Warren wrote on July 4. “Instead, I heard this peach of a woman on the other end.”

Here's what the viewer had to say in the voicemail:

Please go to Target and buy some decent maternity clothes so you don't walk around looking like you got a watermelon strapped under your too tight outfits. Target's got a great line of maternity clothes in case you've never heard of such a thing. You're getting to where you're being disgusting on the TV.

You can listen to it below as well, if you can stomach the comments:

After receiving that voicemail, Warren — who called herself a "thick-skinned journalist" — decided not to let this viewer's voicemail go unnoticed. Rather, she opted to shut down this type of body-shaming, which got a much-needed discussion started about how powerful — and harmful — words can truly be.

And while Warren admitted that she typically wouldn't let comments like these get to her, this voicemail understandably struck a chord with her — as it would with every other woman who is, has been, or ever will be pregnant.

"Unfortunately, I'm pregnant, hormonal, currently not allowed to drink wine, and feeling extra in touch with my feminist side," she wrote on her blog.

Warren wrote on her blog that her immediate reaction went like this:

The anchor noted that pregnancy is already "one of the most emotional, insecure times of your life," and the voicemail she received only added to the insecurities she constantly feels as a broadcast journalist and a pregnant woman on TV. And today's culture of constant bullying doesn't help.

"We are living in a culture tolerating, often even encouraging bullies. Politicians, angry Democrats and Republicans, anonymous keyboard warriors, social media bullies... How do we teach our kids to be kind when adults all around them can say such cruel things?"

So while Warren acknowledged that this woman's cruel message did hurt her, she decided to channel her outrage into "positive energy."

"So, ​I think instead of letting this lady get me down, I'm just going to turn her negative energy into positive energy," Warren concluded her response. "I'm going to say as many nice things as I can to as many people as I can, and I'm going to do it in a dress that fits these beautiful new curves with my 'watermelon' stomach showing."

And that's the absolute best way to a respond to such comments: Shut them down, and do your best to make the world a kinder place, even when it doesn't feel like it.