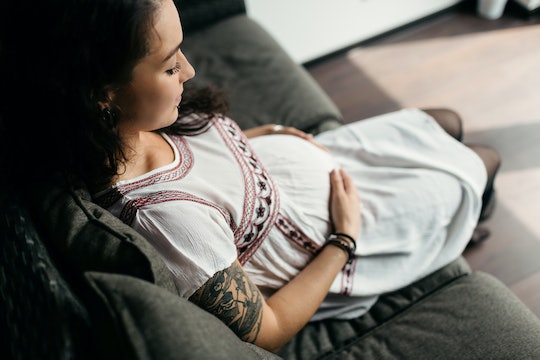 Pregnant Women Everywhere Will Want To Steal This Belly-Touching Hack

The moment my husband first felt our baby move through my belly was incredibly special. Not so special? The first time a stranger in the grocery store tried to do the same. I'm not sure what it is about a pregnant belly that makes people throw body autonomy out the window, but this pregnant woman's belly-touching hack will keep the creepers at bay. Rather than give her belly over to the touching free-for-all, Samantha Reid is sticking to her guns and letting people know that she is not cool with all the belly rubs.

After a discussion with her husband about the number of people touching her belly without permission or warning, Reid received a seriously perfect gift from him: a spray bottle that reads "No Touchy!" and features Kuzco the llama from The Emperor's New Groove. She posted a photo of the bottle to her Reddit account, explaining its purpose. As a fellow expectant mother, I am definitely going to have to steal this hack and make a bottle of my own.

Reid explained to POPSUGAR that she and her husband had been joking about people's tendency to "go crazy" around pregnant women, overstepping boundaries that they may have otherwise respected. "You would get not only curious glances or stares everywhere you went, she said, "but people would surprise you out of nowhere by touching your belly to feel the baby move."

The conversation moved beyond a gag gift when one of her family members crossed a line a month or two after Reid started showing, according to CafeMom. The unnamed family member came in and went straight for Reid's belly, catching her off guard:

I told her that I wasn't comfortable with anyone touching just yet since the baby wasn't moving regularly, but she waved it off and said because we are related, it is her right to touch my belly whenever she wanted. It led to a small argument.

Reid went on to explain in her post that while some people are comfortable with being touched on their bellies, others aren't. Therefore, she told the relative, you should always ask before touching a pregnant woman. Her relative responded that anyone — including strangers — who touch bellies are "just excited and so caught up in the miracle that they don't think."

Reid also shared that she has social anxiety, so the unwanted touching stresses her out more than other people. Social anxiety aside, touching people without their consent is never OK, regardless of whether or not they have a little human growing inside of them. Doing so borders on harassment, and may just lead to legal charges if you do it in the wrong place, according to CNN.

Commenters on the post were quick to praise Reid for not letting people get away with making her uncomfortable. One user wrote:

Seriously though, good for you for setting boundaries, and in a delightfully cheeky way. Hopefully it will help to get the point across. I’ve personally been weirded out by the concept that it’s somehow okay to touch a pregnant woman’s belly without asking, or with asking but not waiting for the okay.

Another explained that unrelated circumstances could make the situation even more uncomfortable for the mom being touched:

I REALLY hate being touched by strangers, because I've been sexually assaulted and surprise touch frightens me. I got a shirt that says "Caution! Do not touch!" over the bump. I've had random people walk up to me and touch me, but not while I'm wearing that shirt!

Reid admitted in the Reddit feed that she isn't sure she'll actually use the bottle while out in public, but family members better look out:

My family has heard us joking about the spray bottle and is aware of my disinterest in being touched, but if one of them tries anything anyway, you can bet they'll get a faceful [sic] of water! It will be funny to everyone there, but I hope it will also make them stop to think about asking before touching people in the future.

The fact that an expectant mother feels the need to have a spray bottle to keep people from touching her is a shame, but her willingness to stand up for what she believes in is something worth celebrating. Body autonomy is not surrendered when you get pregnant.

More Like This
Here's What Pregnant People Actually Want For Valentine's Day
How To Fly Safely During Pregnancy
Mom Gives Birth To Record-Breaking 16-Pound Baby
Is It Safe To Pump While Pregnant? Experts Weigh In
What Parents Are Talking About — Delivered Straight To Your Inbox