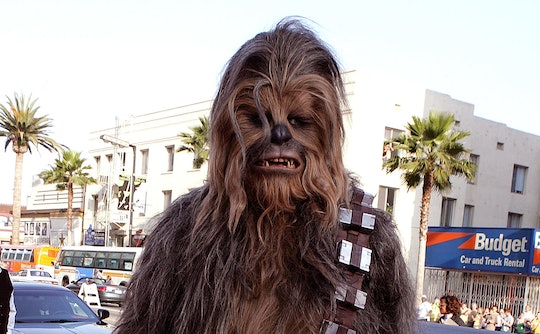 The perfect convergence of girl power and Star Wars has occurred, and it’s in the form of a princess Chewbacca birthday cake for 3-year-old Sophie. What’s that? You’ve never heard of Princess Chewbacca? Well, neither had Sophie’s parents, but that didn’t stop them from going on the hunt for a bakery that would make their dream into a reality. It wasn’t easy, but eventually a friend was able to help them out, and create the absolute coolest cake for a little girl ever.

I can’t even tell you how jealous I am of this couple’s mad parenting skills. My daughter was obsessed with Iron Man from ages 2 to 4, and I know she would have loved a Princess Iron Man cake, but it never occurred to me. (Although maybe next year I'll prompt her to revisit the obsession just so I can get a cake like that.)

And guess what? The princess cake redux is actually a bit of a trend, it seems. Finally, parents are accepting that girls can love pretty things and want to be badass superheroes. Those superheroes don’t need to wear short skirts and low-cut tops, either. You may be thinking, “What about Wonder Woman or SuperGirl?” Well, yes, they’re out there, and they're badass, but they aren't the only choices for little girls to be into.

Umm, who wouldn't want this dress? I bet Luke and Han are jealous AF.

And here is another fantastic princess:

Apparently, more than one little girl out there thinks that Hulk would rock a dress. He does look adorable, doesn't he?

And let's not forget poor Godzilla, who was beginning to feel left out.

Who wore it best?

This last one? I don't even know. But I have a feeling the little girl who got to eat this cake was so into it.